Snakes of the Sssssouth Bay

The Santa Clara Valley is home to a variety of snakes. They are ectothermic, meaning they are cold-blooded and rely on their external environment to regulate their body temperature. So as it warms up in the spring and summer months, they come up from underground to soak up the heat and breed soon after. Like them, or not, snakes are vital to their ecosystems. Keep reading to learn why it's important for us to respect and protect snakes.

While some people are afraid of snakes, most species are harmless, and some are even kept as pets. (Note: We thank you for NEVER removing snakes - or any animal - from the wild as this can harm local populations.) Snakes help control populations of harmful rodents and insects and they also provide food for other animals on the food chain. We hope the more you learn about snakes, the more you will appreciate how special and important they are to Santa Clara Valley's parks and open spaces.

Fun fact: Baby snakes are called snakelets! We also would like to give honorable mention to some other fun snake nicknames including snakies, sneks, snups, snittens, snicks, and danger noodles.

Here’s a guide to the snakes you may be lucky enough to see when enjoying an outdoor excursion in the Sssssouth Bay. 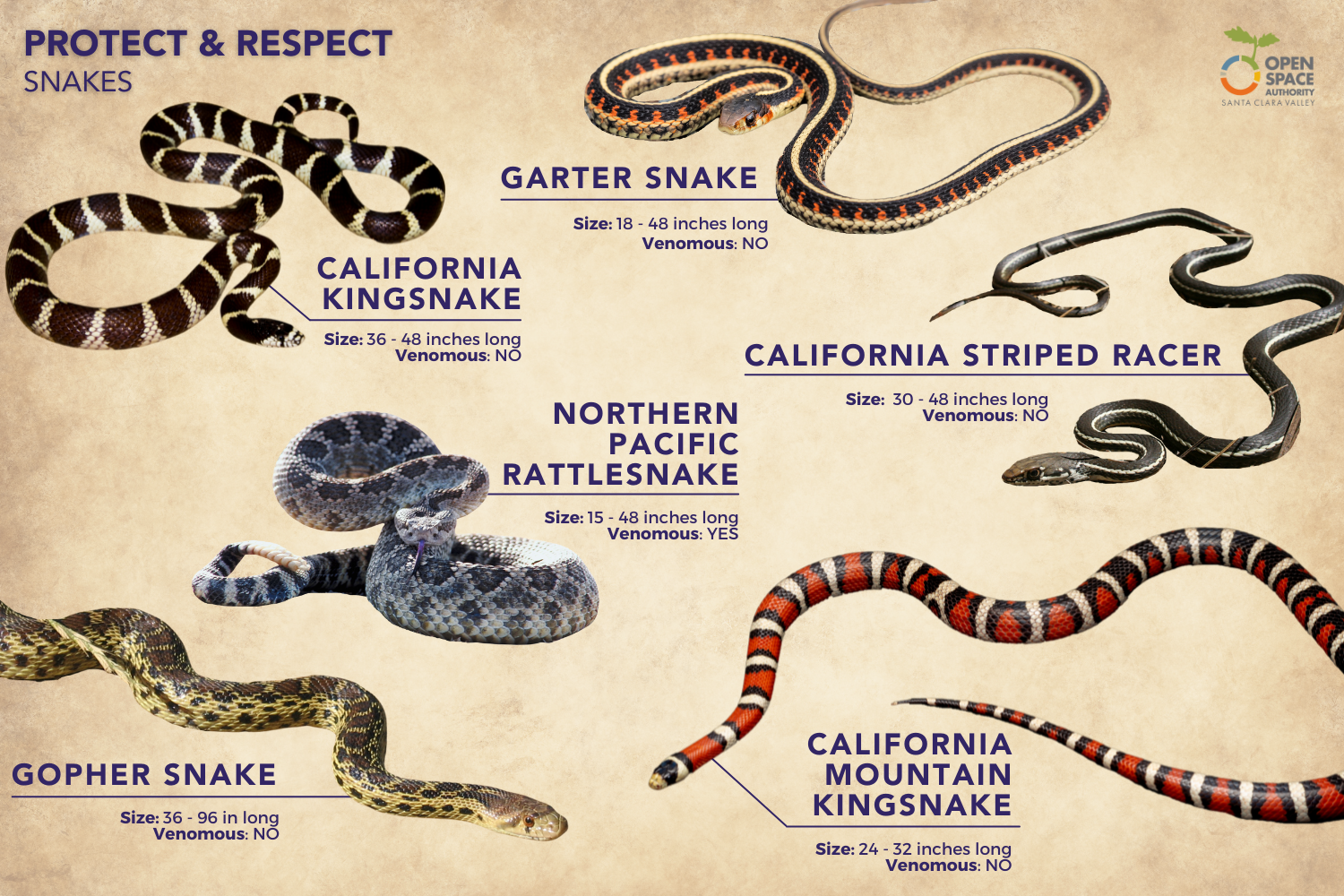 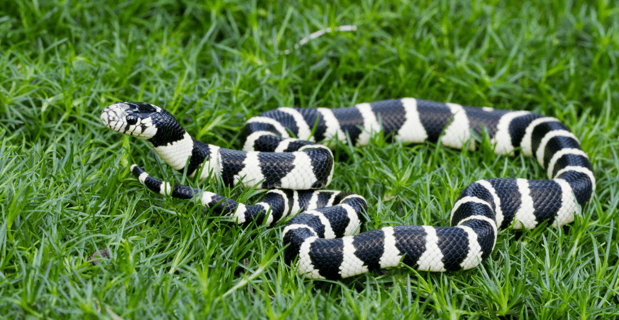 California kingsnakes are 4-6 feet in length, and vibrant in color – sometimes they’re a glossy black and white, sometimes brown and white. Their mating season takes place between early to late spring, taking six to 10 weeks for the eggs to hatch.

These serpents may be non-venomous, but they are effective rattlesnake repellants. They feed on other snakes, lizards, birds, and eggs. Kingsnakes are some of the most powerful constrictors in the world, surpassing even boa constrictors for their pound for pound pressure. (We would say they’re not skipping leg day, but...you see the problem...)

California kingsnake’s also have a unique defense mechanism. When frightened or angry, they lift and twirl their tail to release a potent musk - similar to a skunk! As you can imagine, any animal trying to eat them will likely spit them out.

The lifespan of these snakes is around 12 to 15 years in the wild.

Rattlesnakes are a special and iconic California species and are the only venomous native snake species in the state. They kill their prey by biting and injecting venom using their sharp fangs. Once the animal dies, they swallow it whole. The rattlesnake’s unfused jawbones can stretch and expand to swallow prey bigger than its head. Gulp!

These 1 to 4 foot long snakes are dangerous, but trust us when we say they are NOT out to get you. They bite when they feel threatened, yet another great reason to stay on designated trails when you're out exploring. Many rattlesnakes living around the preserves are accustomed to foot traffic and move off the trail when they feel the vibrations of people walking towards them.

And even though rattlesnakes have venom, they don’t always use it. A “dry bite,” is simply a warning bite given to a predator without releasing any venom.

Another warning system used by these iconic snakes are their signature “rattles.” These are made of keratin, the same protein that makes up our fingernails, with loose pieces of the same material inside. When they feel threatened, they rattle their tails to warn predators. And contrary to popular belief, the number of rings on their rattle does not equal the number of years they’ve been alive – rather, it equals the number of times they’ve shed their skin.

Another unique characteristic about rattlesnakes is the way they give birth. Rattlesnakes are ovoviviparous, meaning they give live birth to their young. They hold their eggs inside of their body where the snakelets hatch, and then work their way out.

The lifespan of these snakes is around 12 to 15 years in the wild.

Gopher snake coloring depends on their subspecies and location, but many are mistaken for rattlesnakes. They possess an adaptation known as Batesian mimicry, where a harmless species mimics a harmful species. When threatened, they coil up like a rattlesnake and vibrate their tail so fast it blurs. They can even push their chin on the ground and make their cheekbones stick out like a rattlesnake. This type of mimicry helps gopher snakes scare off predators, but sadly sometimes humans kill them by mistake, thinking they are dangerous rattlers.

There are a few ways to tell the difference. Besides being longer and slimmer than rattlesnakes, they also have narrow, round heads, and rounded pupils - whereas rattlesnake pupils are vertical and almost catlike.

Also known as bull snakes, these 3 to 8 foot long serpents are one of the most commonly seen in the area. Gopher snakes lay 10-12 eggs at a time, then coil up to keep them warm and protect them until they are born. (We’re not crying, you’re crying!)

The lifespan of these snakes is up to 12 to 15 years in the wild.

Have you heard the adage “red next to yellow, kill a fellow; red next to black, a friend of Jack?” The California mountain kingsnake represents this rule well. Though their colors are striking, these snakes are non-venomous. As Batesian mimics, these snakes have evolved to fend-off predators simply by looking similar in coloration to venomous coral snakes.

Much like the California kingsnake, when threatened they release a musk to deter predators. Thanks to their strong stomach acids, California mountain kingsnakes can feed on many animals, including lizards, birds, rodents, and other snakes.

These critters breed between April and early June, and they lay a clutch of up to 10 eggs which then incubate for around 60 days before they hatch. The lifespan of these snakes is around 12 to 15 years in the wild. 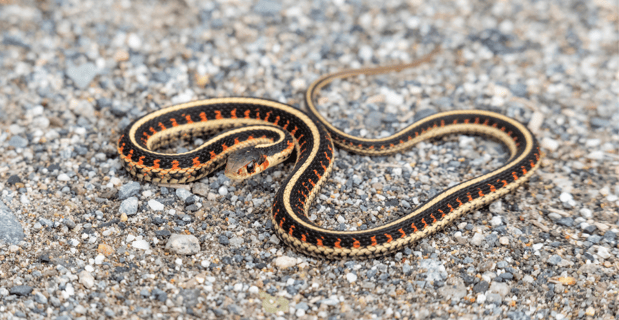 Garter snakes are yet another harmless snake species in the area that do a great job eating pesky rodents. If you’ve seen a snake in your backyard or garden, odds are it’s a garter snake that provides you with the benefits of natural pest control.

While garter snakes are non-venomous, we don’t recommend picking them up. They have toxins in their saliva that is deadly to their prey. It won’t kill humans but can cause an unpleasant reaction.

A yellow stripe runs the length of their bodies from head to tail, instead of side to side like kingsnakes, and they have spits of orange all over. These critters are also aquatic, and do best living near water. They snack on fish, frogs, and other amphibians and water-dwelling species.

Fun fact: These unassuming snakes are one of the few animals that can eat newts without being poisoned by their toxins!

Garter snakes are ovoviviparous, meaning they bear live young! The young are incubated about halfway down from the snake's body, usually for two to three months. Most mothers give birth to around 20-40 snakelets between late July and October.

The lifespan of these snakes is up to four years in the wild.

The California striped racer (also known as the California whip snake) is another nonvenomous local snake species with yellow stripes that run from head to tail. One way to differentiate this species from a garter snake is the lack of a dorsal stripe running along its back.

Whip snakes get their name from a nifty defense mechanism – they whip their bodies quickly back and forth in a flurry of motion to escape. They are also known to fight back viciously and repeatedly bite animals that attack them – all the more reason to not attempt to handle wild snakes. Whip snakes, much like the California kingsnake, can eat rattlesnakes, as well as lizards, small rodents, and other snakes.

They grow to be about 4 feet long but stay relatively thin.

They lay their eggs in late spring or early summer.

The lifespan of these snakes is around eight years in the wild.

The Santa Clara Valley is home to many amazing animal species and we are proud to protect and restore the habitat these critters need to survive!

A Guide to Keeping Wildlife (And Yourself) Safe