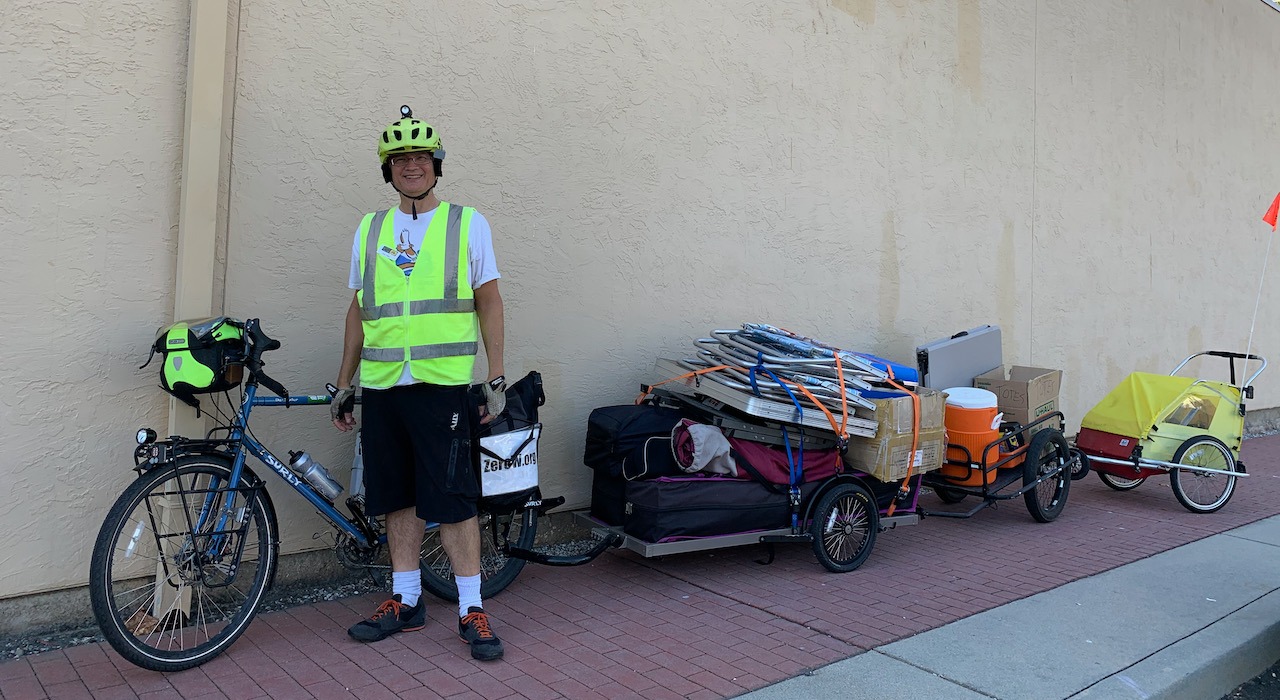 If you’re on the road and see a bicyclist towing a trailer loaded with up to 650 pounds of supplies, there’s a good chance that it’s Tim Oey, Events Manager at Silicon Valley Bicycle Coalition (SVBC), on his way to work. Or the grocery store, or the doctor’s office, or a community event, or really anywhere else one might think to travel. That’s part of Oey’s biking philosophy: “anywhere, anytime, any kind of weather, any day.”

Following up his mantra with the popular Scandinavian saying, “there’s no such thing as bad weather, only bad clothing choices,” Oey serves as a shining example of how we can do just about everything with a bike that we can with a car -- and with several added benefits. With a dedication to showing people that biking is beyond a viable alternative to driving, it only makes sense, then, that he works for SVBC, an organization dedicated to doing the same thing. And with May being National Bike Month, he and the SVBC are planning many exciting opportunities to get people out of their cars and into the bike lane. 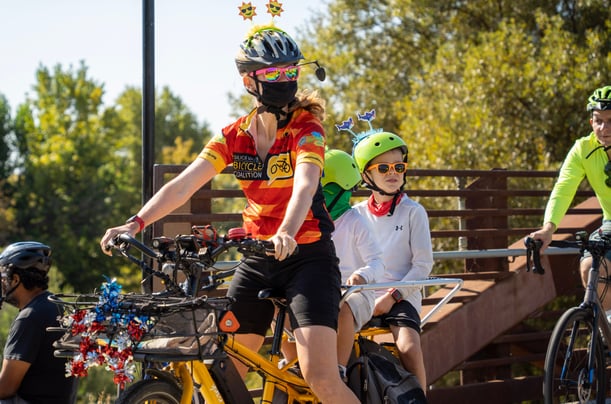 The benefits of biking instead of driving are well-documented and have been for years. Compared to driving, biking emits a fraction of greenhouse gas emissions into the atmosphere, making it a far more climate-friendly form of transportation. With the life-changing physical and mental health benefits of biking, it’s no wonder that Oey, among many others, has never looked back. 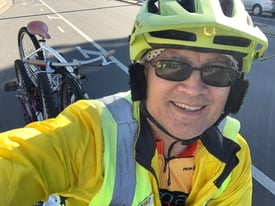 Spending much of his career in the tech industry, Oey completely “switched gears,” as he put it -- pun fully intended -- when he came to better understand the seriousness of climate change’s trajectory. He realized how carbon-intensive driving is and that we quickly need to make serious changes to help protect our planet. In 2019, he went on a business trip from San Francisco to Boston, over 5,000 miles, giving a total of 254 talks to teach people across the country about biking, living a zero-waste lifestyle, and the many other ways we can help our world. He biked the whole way.

Now, Oey plans and hosts events with the SVBC, a non-profit organization dedicated to sharing with the public the enjoyment and viability of biking as a form of transportation, not just recreation. To support this mission, they host yearly events in honor of National Bike Month and National “Bike to Wherever Day,” usually known as “Bike to Work Day,” coming up on May 21st. Originally a day to incentivize people to ride their bikes to work, the goal of the day was updated to accommodate COVID restrictions and the transition to remote work. To celebrate and to increase the flexibility of how people can participate, the festivities are spread throughout the entire month of May, with different events each week, including a “bike to shop” event, a film festival, and a Pledge to Ride, all followed up with a virtual bike BASH.

“Biking can save the world,” Oey passionately mentioned, after describing the work of the SVBC which, throughout the rest of the year, is dedicated to ongoing biking education and infrastructure advocacy. They offer classes for fixing and riding bicycles, resources for people to get involved and learn about local opportunities, and advocate for secure bike parking and bicycle roadways. “Bicycles are a final destination for being a super solution to climate change.” While Oey has the capacity to tow a remarkable amount of materials by bike -- “stuff that wouldn’t even fit in a Chevy Suburban” -- he isn’t arguing that everyone needs to participate at such a scale. His work is more to show people that biking is an option, and one that’s worthwhile. Simply put, “just bike.”

To find the best route or trail, check out our Guide to Biking Santa Clara Valley, and for more resources, visit the Silicon Valley Bicycle Coalition website.