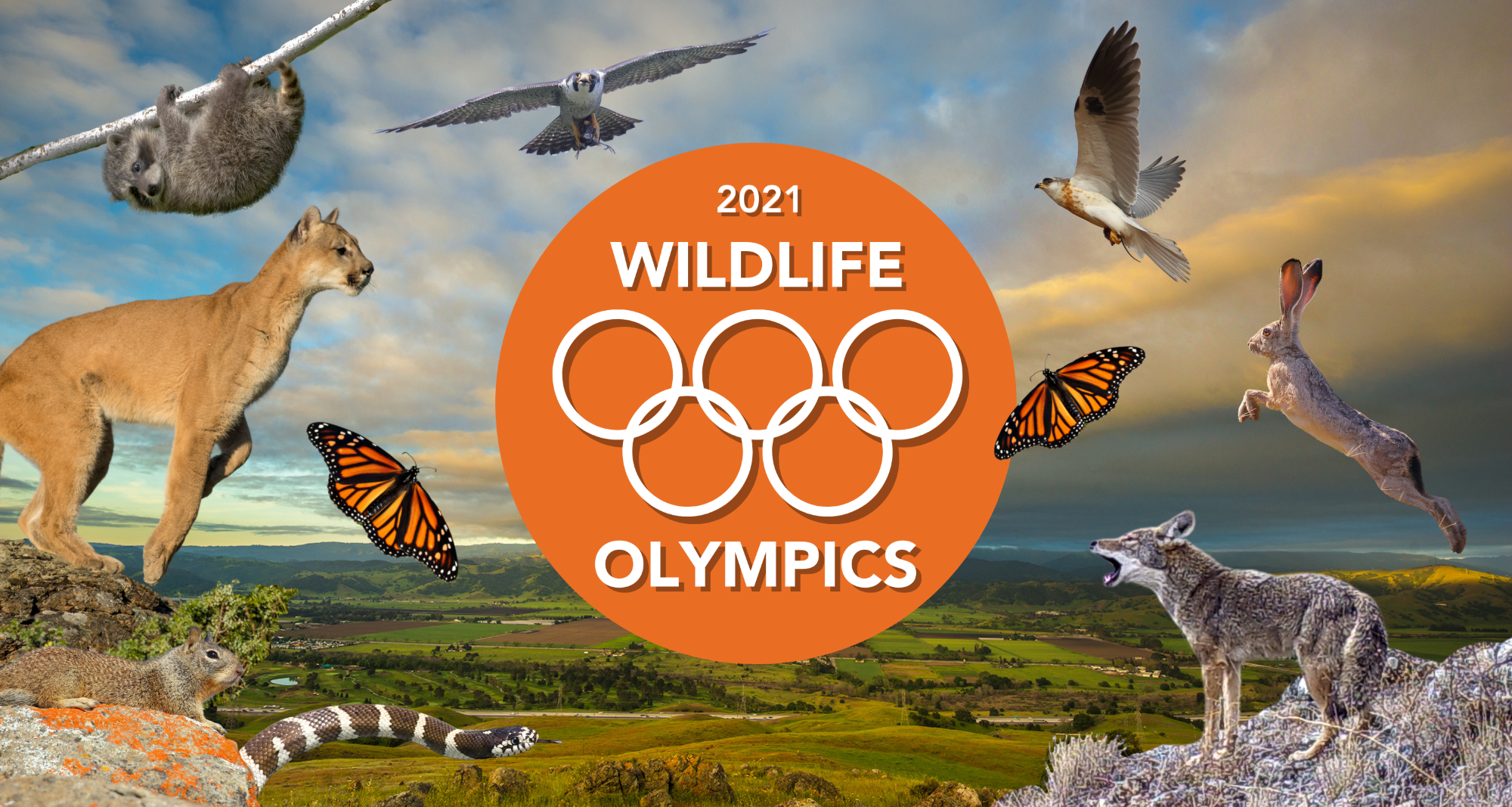 As the world watches the Summer Olympic Games in Tokyo, we are celebrating our own version of the Olympics closer to home. Welcome to the Santa Clara Valley Wildlife Olympics 2021!

From the smallest insects to the largest elk, our region's native wildlife possess abilities that would surely earn them a place on the Olympic podium. Learn more about 15 special animal Olympians and their gold-medal events below! 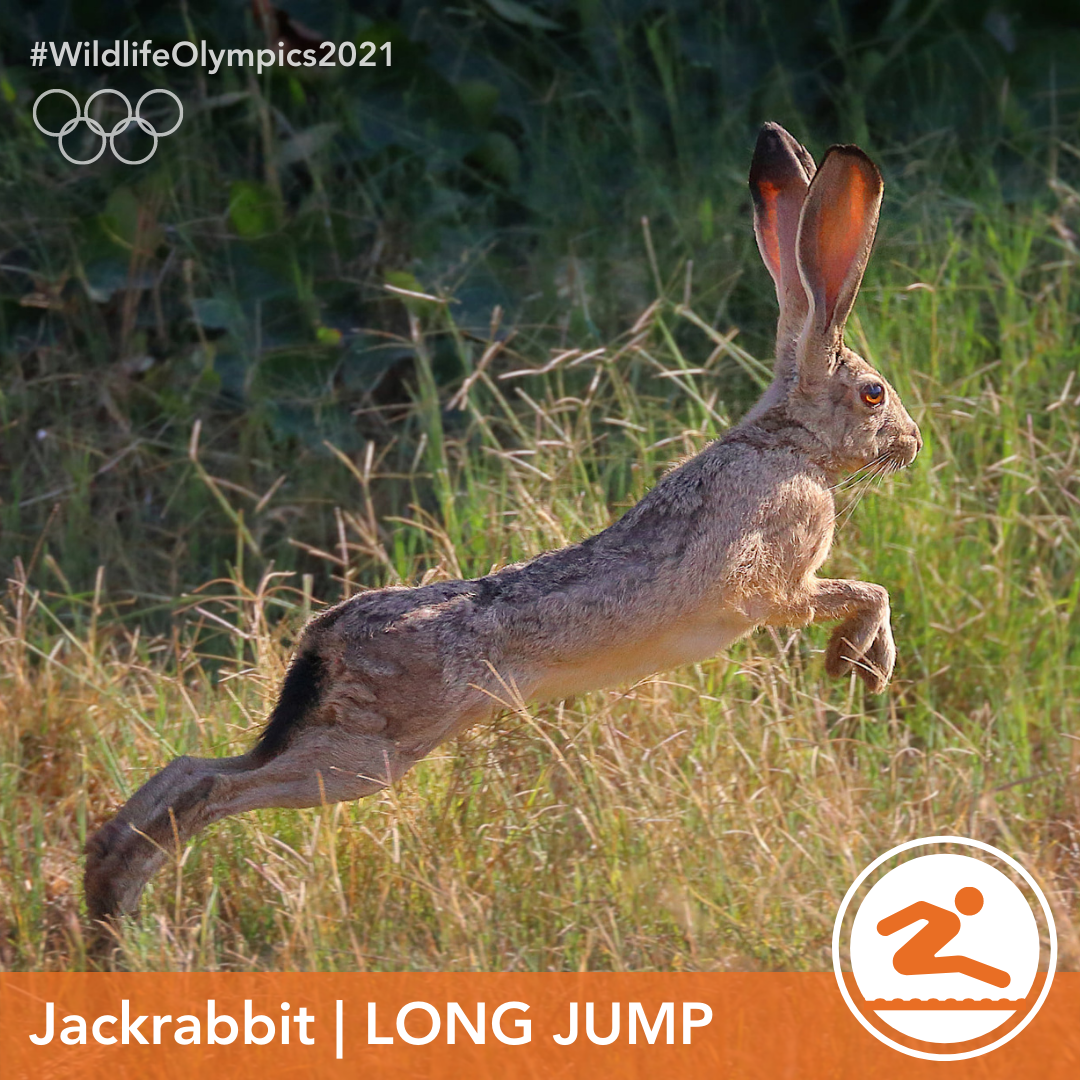 The BLACK-TAILED JACKRABBIT is our first animal Olympian of the games, for gold medal in LONG JUMP! These hares can jump up to 20 feet in one bound - that’s 10 times the length of their bodies. For a human, the equivalent would be a mind-blowing 60 feet, which is more than twice the current Olympic record of 29 feet (set by Mike Powell in 1991). And Long Jump isn’t the only Track & Field event the jackrabbit could compete in... They can also run as fast as 40 miles per hour, thanks to strong hind legs. 100-meter dash, anyone? 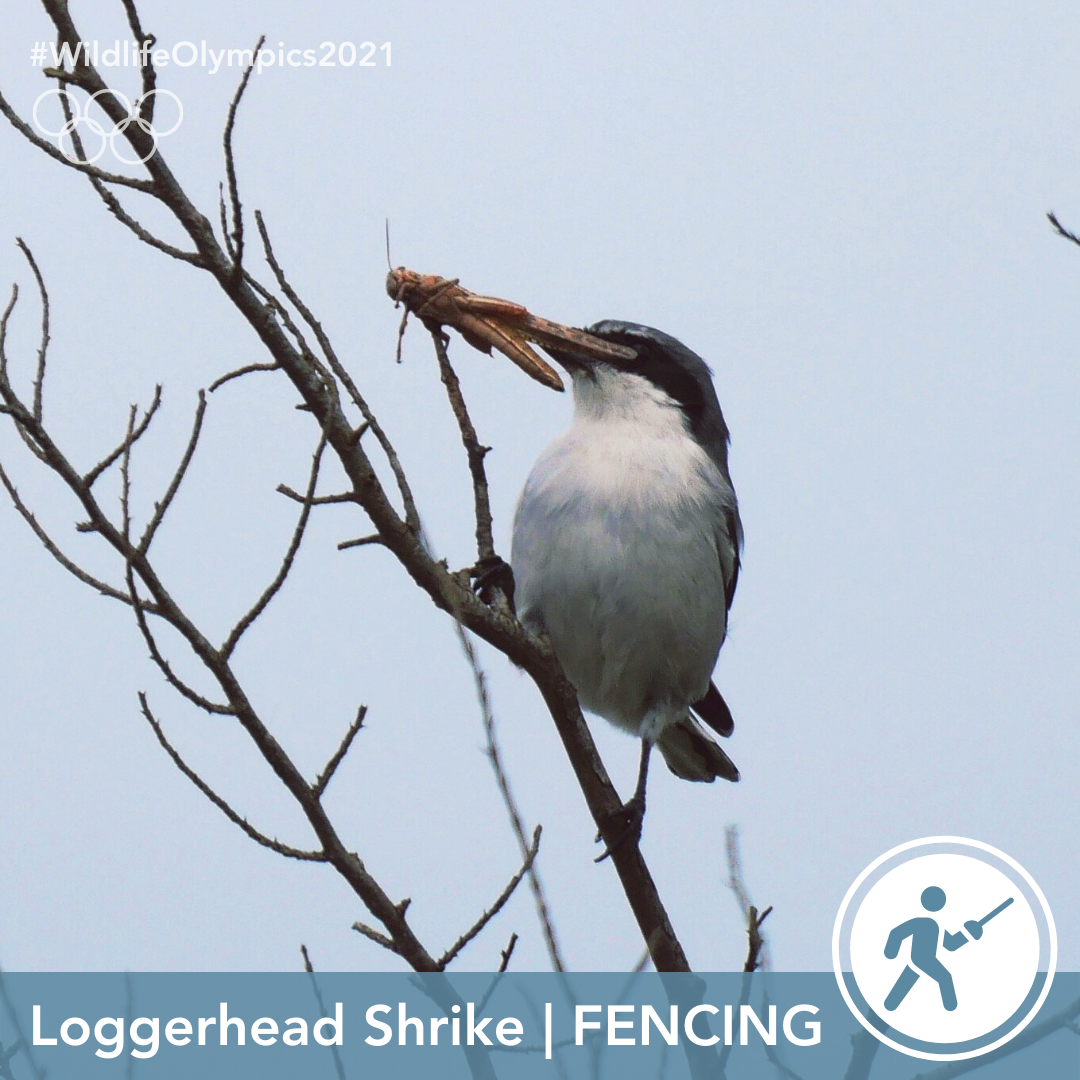 Our next animal Olympian is the LOGGERHEAD SHRIKE, winning the gold medal in FENCING! This small, masked black, white, and gray bird hunts insects, lizards, and small mammals. Because the loggerhead shrike doesn’t have talons, it often impales its prey on sharp objects like thorns or barbed wire fences to make it easier to eat them, or to save them for later! Talk about a TOUCHÉ! 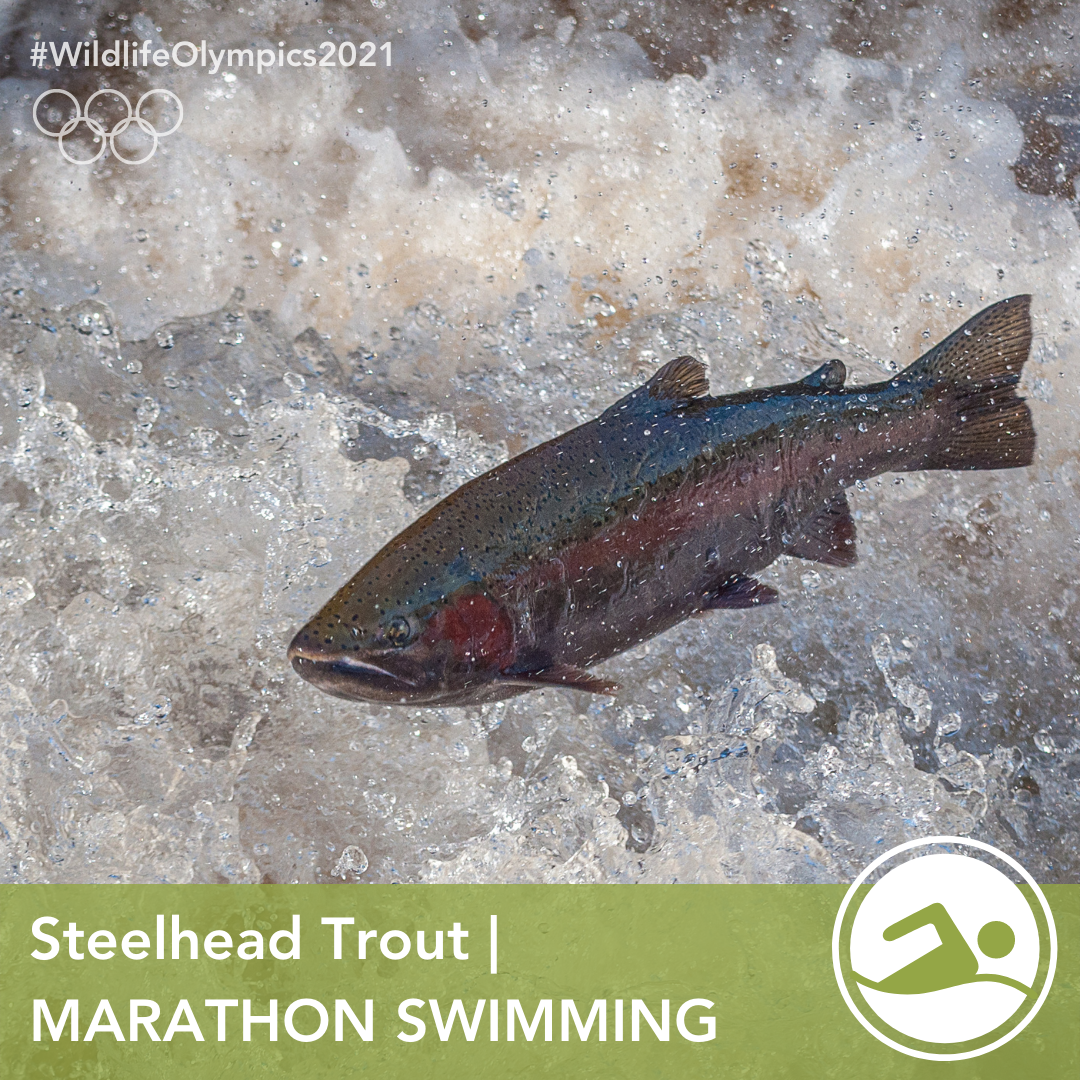 Among our native animals, the gold medal for MARATHON SWIMMING easily goes to the STEELHEAD TROUT. Steelhead trout are anadromous, which means they migrate from a freshwater stream to the ocean, then back to the stream of their birth to spawn. And unlike salmon who die after spawning, steelhead can return to the ocean and migrate back upstream to spawn several times over their life! So how far IS this trip? The distance between freshwater and ocean varies, but each migration can be hundreds of miles. Some steelheads are known to travel THOUSANDS of miles. Compare this to the 10 km (6.2 miles) of the human Olympic marathon swim... But hey, we don’t have gills!

Along with distance swimming, these fish also hold their own in the swim sprints. Steelhead trout can hit burst speeds of 26 feet per second! Look out, Michael Phelps! 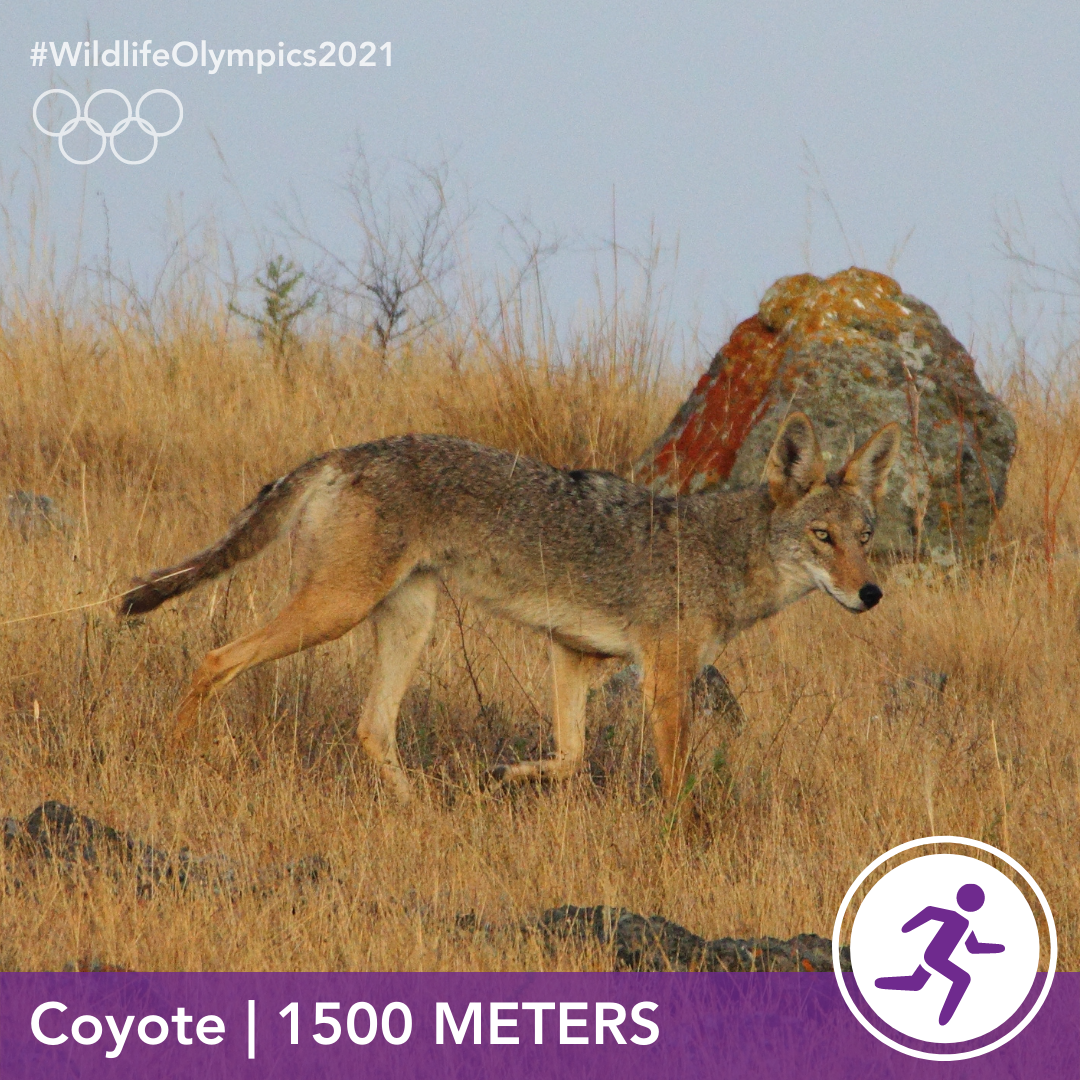 The COYOTE is our gold medalist in the mid-distance races, such as the 1500 METERS and 5000 METERS. If a coyote is sprinting, it can reach speeds of up to roughly 35-40 miles per hour! This speed drops to about 20 miles per hour for distances of up to a few miles. While some animals (such as the jackrabbit) are faster over shorter distances, the coyote’s endurance will give it the gold for races over a half mile. Watch out, Road Runner... Wile E. Coyote is on the way! 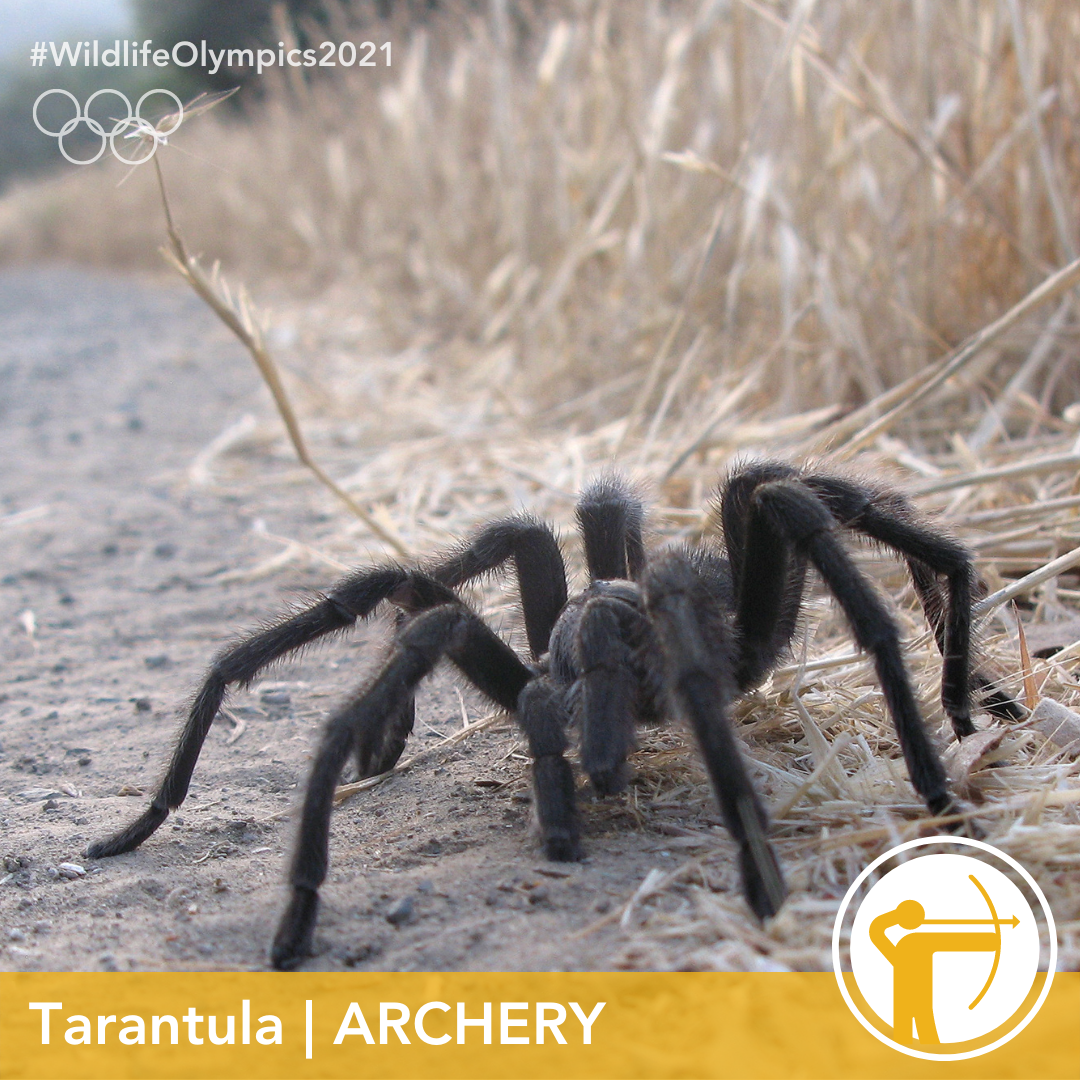 The CALIFORNIA BROWN TARANTULA is our animal Olympian for gold medal in ARCHERY. New World tarantulas possess the amazing ability of shooting their own hairs as a defense mechanism. When threatened, tarantulas will turn toward the attacker and briskly rub their hind legs against their abdomen, throwing the hairs in the direction of the enemy. The hairs have barbs which allow them to work their way into the skin and can be fatal to small mammals (in humans, they can cause an itchy rash). These special hairs are called “urticating hairs” (from the Latin word “urtica,” which means "nettle."). Bullseye! 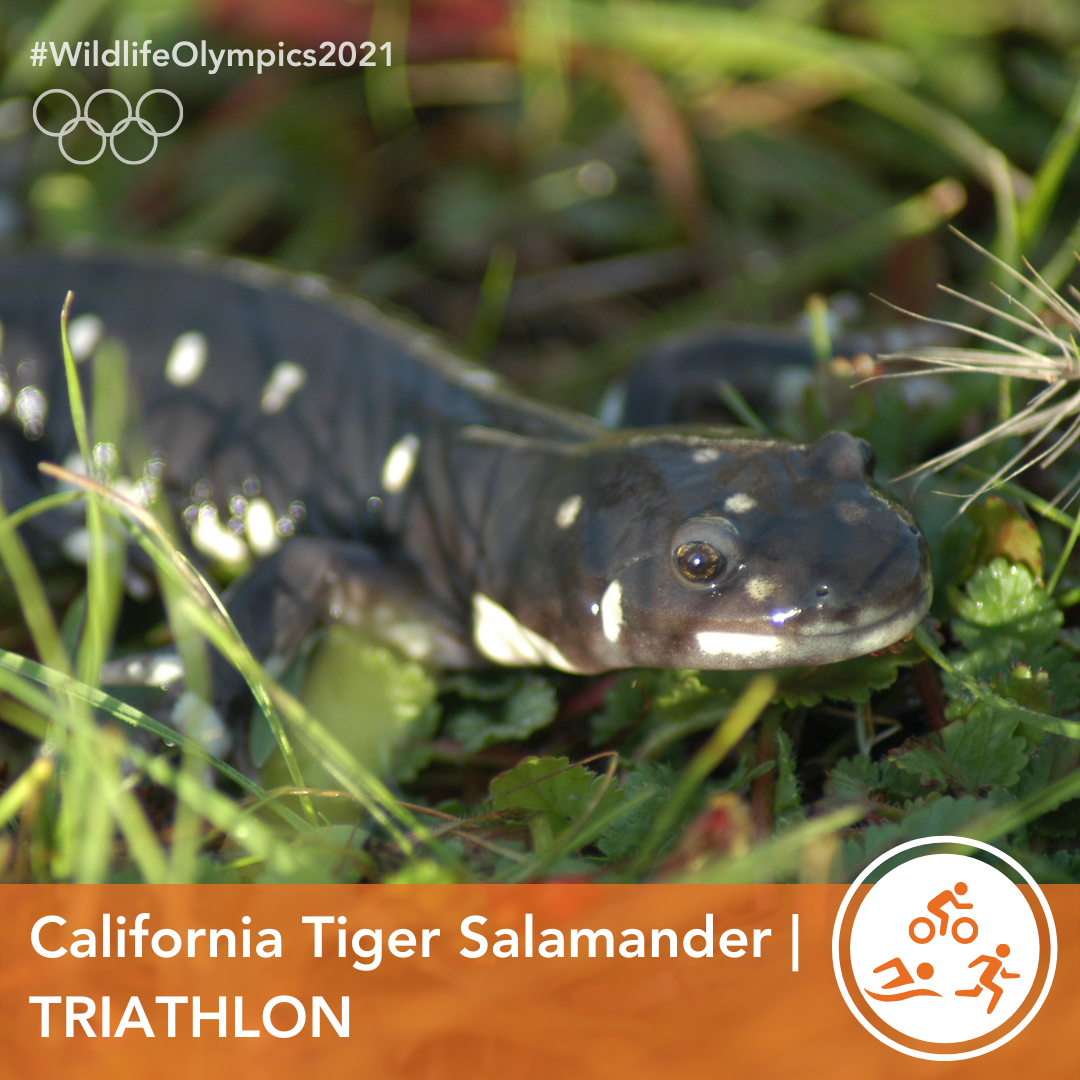 Our gold medalist for the TRIATHLON is the CALIFORNIA TIGER SALAMANDER. As an amphibian, the California tiger salamander spends time both in water and on land, making it the ideal contender for the Triathlon. Larvae hatch from eggs laid in water, where they swim using gills and tail fins. Over 3-6 months, these aquatic larvae transform into four-legged salamanders that live on the ground and breathe air with lungs, spending most of their time in underground burrows. When the wet season begins, they migrate back to ponds to breed, up to 2 miles away! …Although we can’t say that we’ve seen one ride a bike – yet! 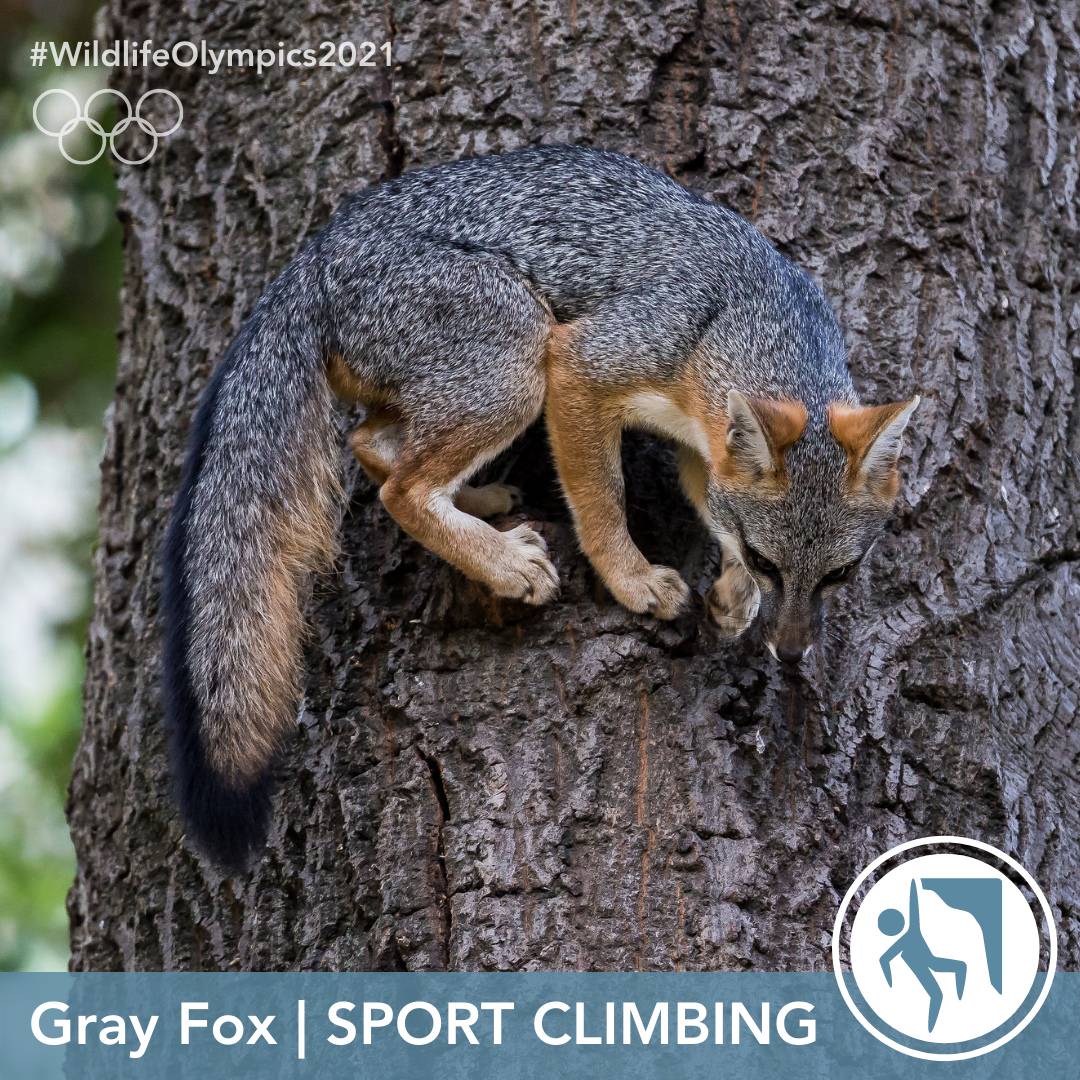 The GRAY FOX takes the gold for one of the Olympics’ newest events, SPORT CLIMBING. The gray fox is one of only two canine species that regularly climbs trees, earning it a spot on our Olympic podium. While other fox species might occasionally jump up to tree branches, gray foxes have rotating wrists and semi-retractable claws (unusual for canines) that let them actually climb tree trunks. Their extremely sharp claws allow them to scale rocks, trees, and even rooftops. They can also rotate their forearms and twist their bodies, allowing them to make their way higher up in a tree. These small foxes climb trees to find food, sleep, and escape predators. No harness needed! 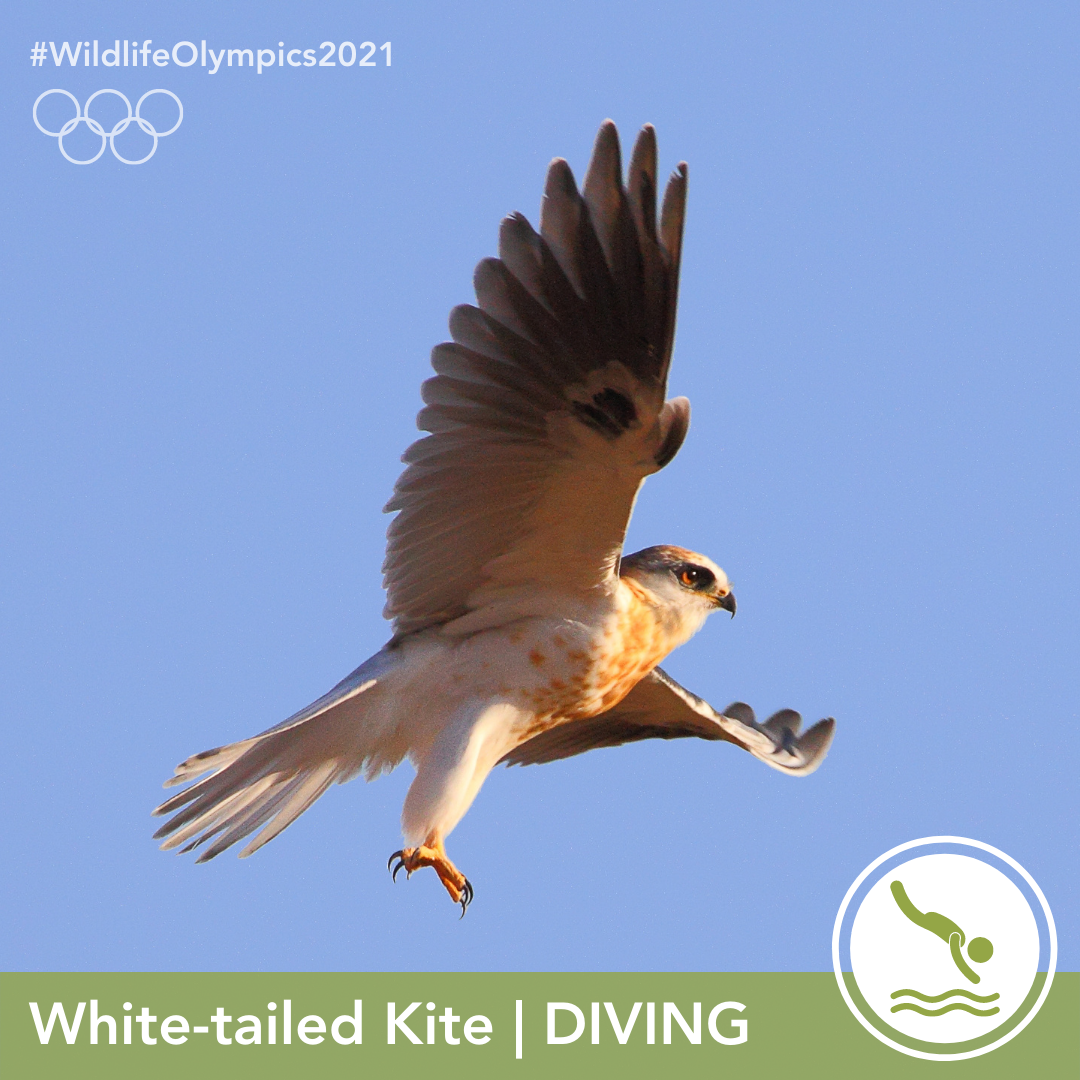 The WHITE-TAILED KITE is our gold medalist for DIVING. While kites don’t dive into water, they take this event for their unique hunting behavior. These medium-sized raptors hover stationary 15 to 80 feet above the ground, then dive nearly vertically straight down to capture their prey. This hovering performance is so distinct to this raptor that birders call it “kiting.” Unlike human athletes, kites drop feet-first when diving for prey, keeping their wings nearly vertical. They may not go head-first into the water, but when it comes to diving these birds are unflappable. 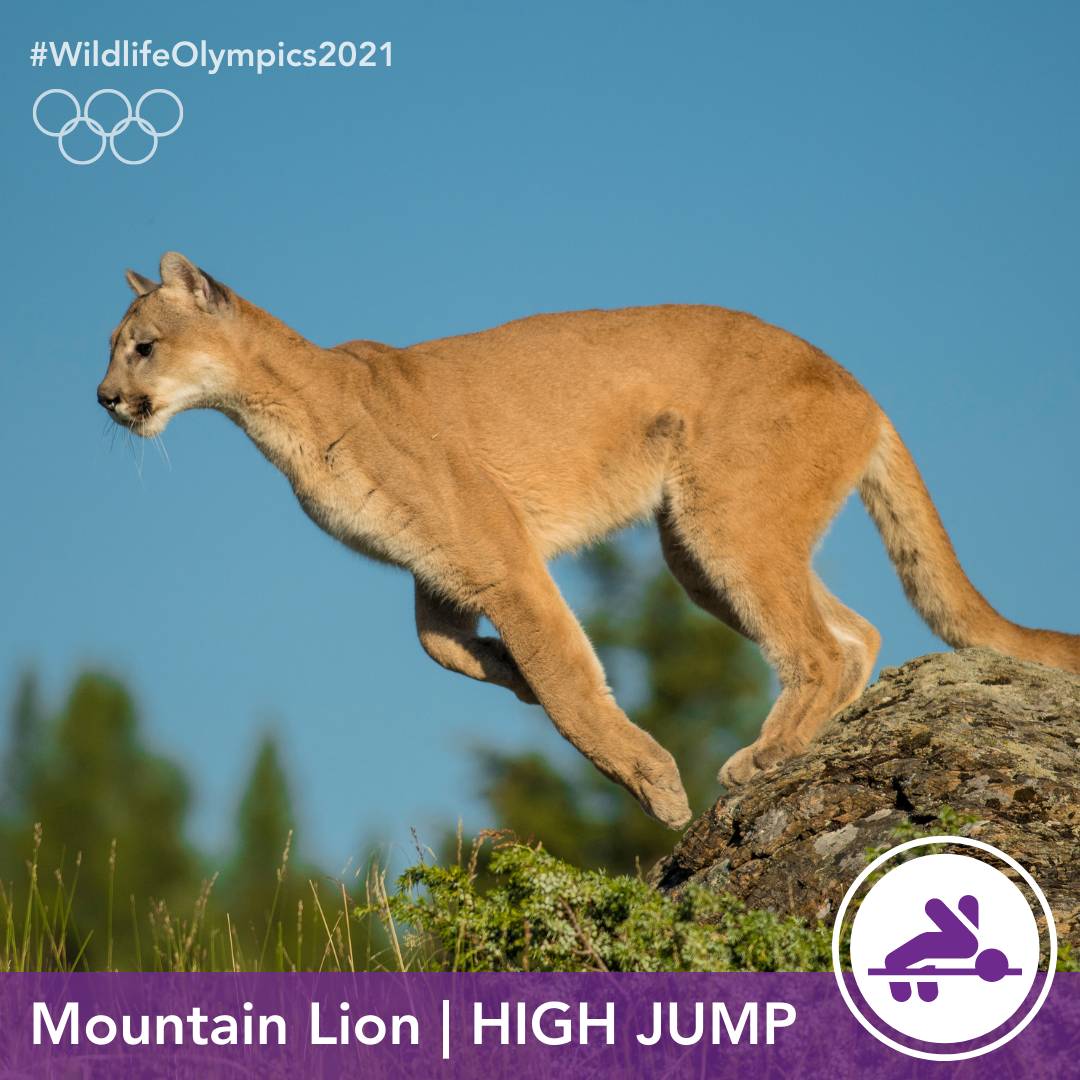 We’re back at Track & Field for our next animal Olympian! The gold medal in HIGH JUMP goes to our region’s largest cat, the MOUNTAIN LION. These huge felines (also known as pumas or cougars) can leap 15 feet from the ground up a tree – with some reports of 18 feet! That’s more than double the human Olympic High Jump record of 2.45 meters (8 feet, ¼ inches), set by Javier Sotomayor in 1993.

The mountain lion could also hold its own in Long Jump, with single bounds of 40 to 45 feet, and sprints, with running speeds of up to 45 miles per hour. Give this cat some opposable thumbs for throwing events, and we have our next decathlon champion! 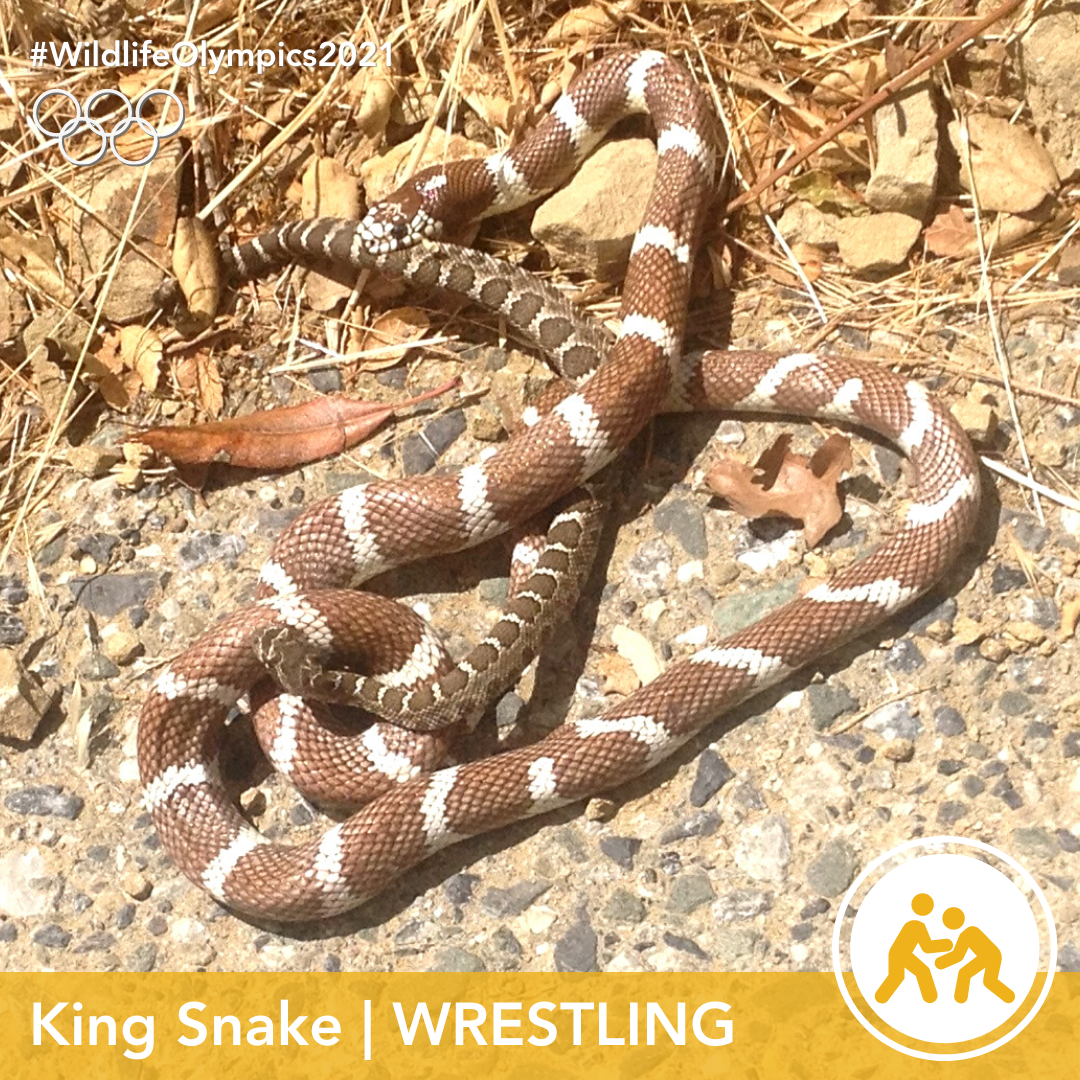 The KING SNAKE takes the gold medal for WRESTLING. Unlike venomous snakes, the king snake kills its prey by using constriction – otherwise known as squeezing to death. Research suggests that king snakes are, pound for pound, the most powerful constrictors in the world, beating out even the notorious boa constrictors. King snakes use their deathly wrestling skills to prey on rodents, birds, lizards, and other snakes – all of which they eat whole! How’s that for a headlock? They are also immune to the venom of pit vipers (such as rattlesnakes), which allows them to overpower and eat venomous snakes larger than themselves! There’s a reason this snake is called the KING. 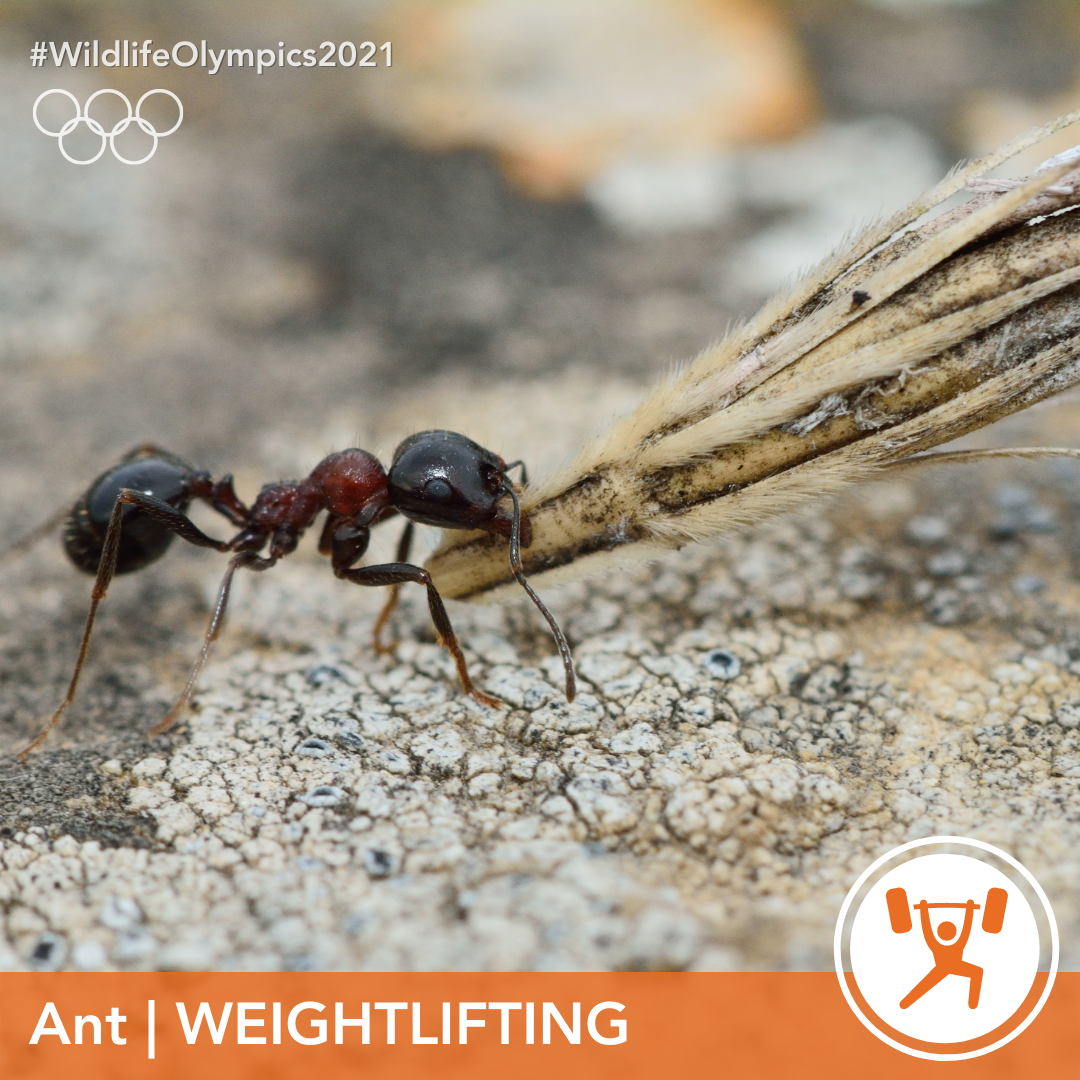 The ANT is the champion of WEIGHTLIFTING. Of the 12,000 species of ants worldwide, there are about 280 native and introduced species that live in California. Each species of ant is different, but most can lift 10 to 50 times their bodyweight! This amazing strength comes from having tiny bodies, which gives ants thicker muscles relative to body size. So, ants can produce more force pound-for-pound than larger animals. The human Olympic record for an overhead lift is 579 pounds (263 kg), set by Hossein Rezazadeh in 2004. If Rezazadeh were an ant, this record would be at LEAST 3,000 pounds! 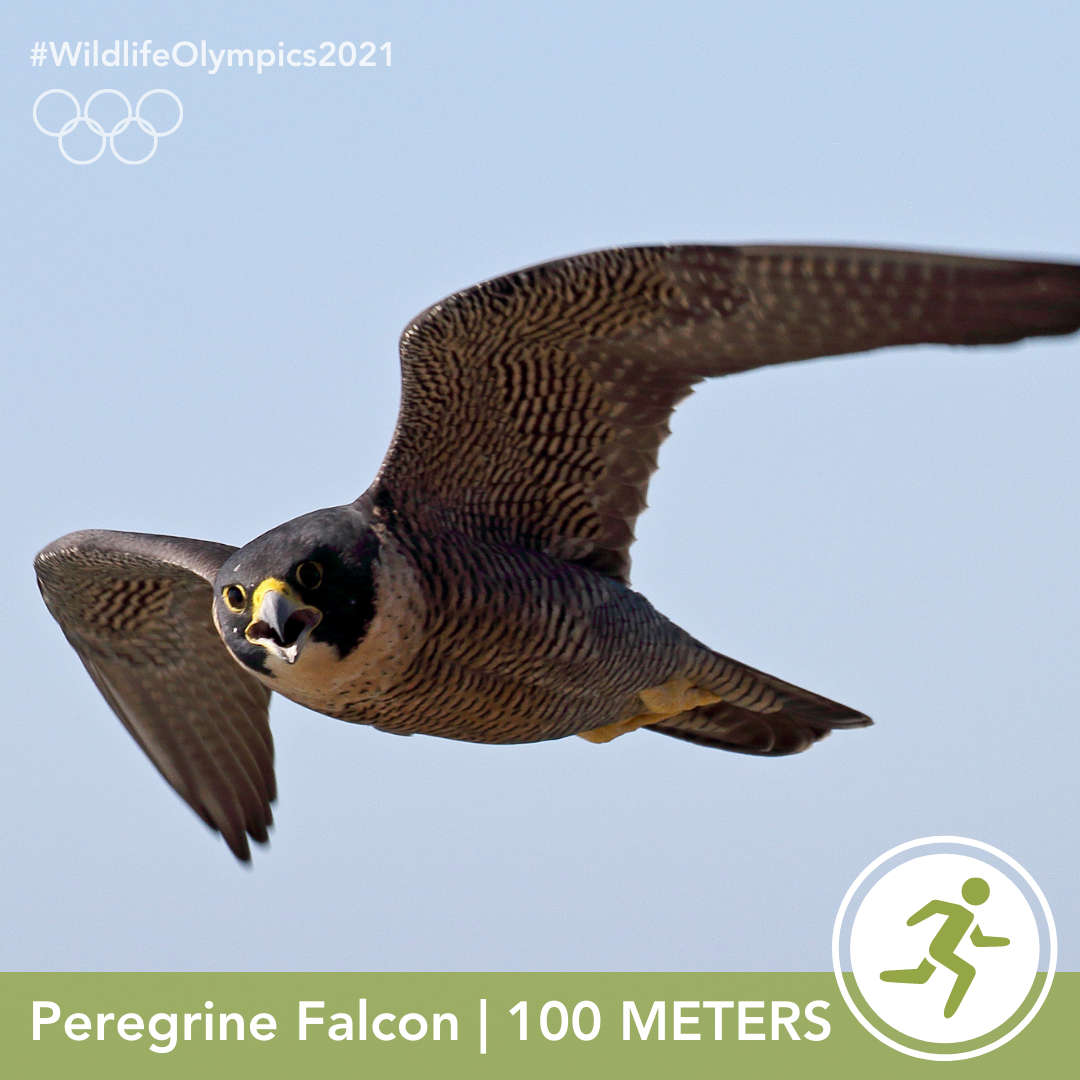 The gold medal for the 100 METERS goes to the fastest animal in the world, the PEREGRINE FALCON. These raptors boast an impressive 40 to 60 miles per hour while flying using wingbeats alone, which is one of the fastest known speeds for level flight among birds. However, the Peregrine falcon’s real speed comes from its jaw-dropping dives of over 200 miles per hour. That’s as fast as some Formula One race cars! Even more phenomenal is that these falcons have enough control and accuracy to capture prey at the end of this high-speed dive (called a “stoop”). Usain Bolt best watch the skies for the competition... 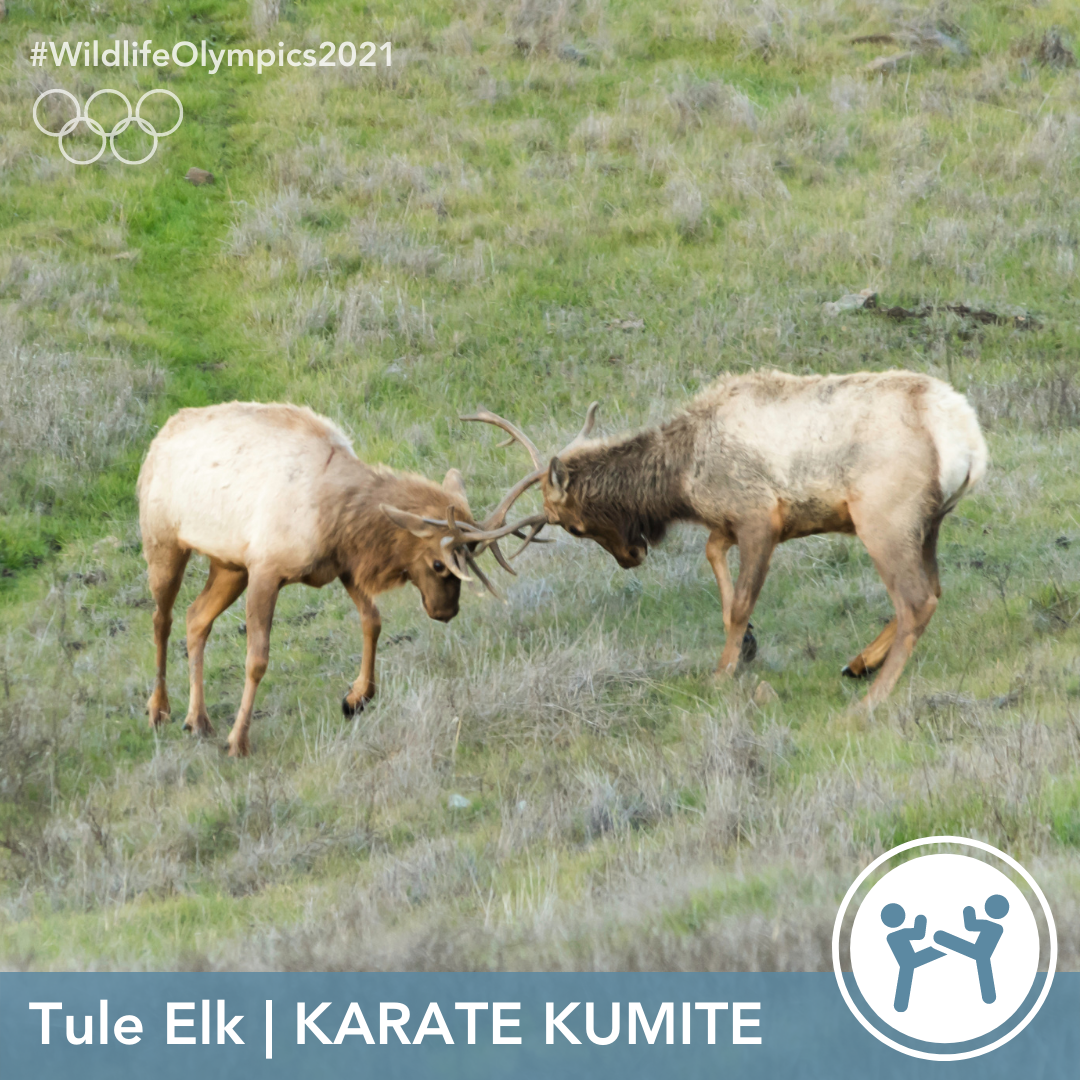 In the world of martial arts, the TULE ELK takes the gold for KARATE KUMITE (kumite refers to the sparring discipline of karate, rather than the solo discipline, kata). Tule elk are one of the largest animals native to the Santa Clara Valley, with adult male bulls weighing between 500 – 700 pounds on average. During the rutting (mating) season, these huge bulls fight it out for dominance and the right to mate with the females of the herd. During these intense fights, bulls lock antlers and shove each other with all their strength. Like karate, this sparring focuses on strength, power, and solid stances. And, like karate, tule elk battles are not fights to the death but rather displays of skill, strength, and stamina. Hajime! 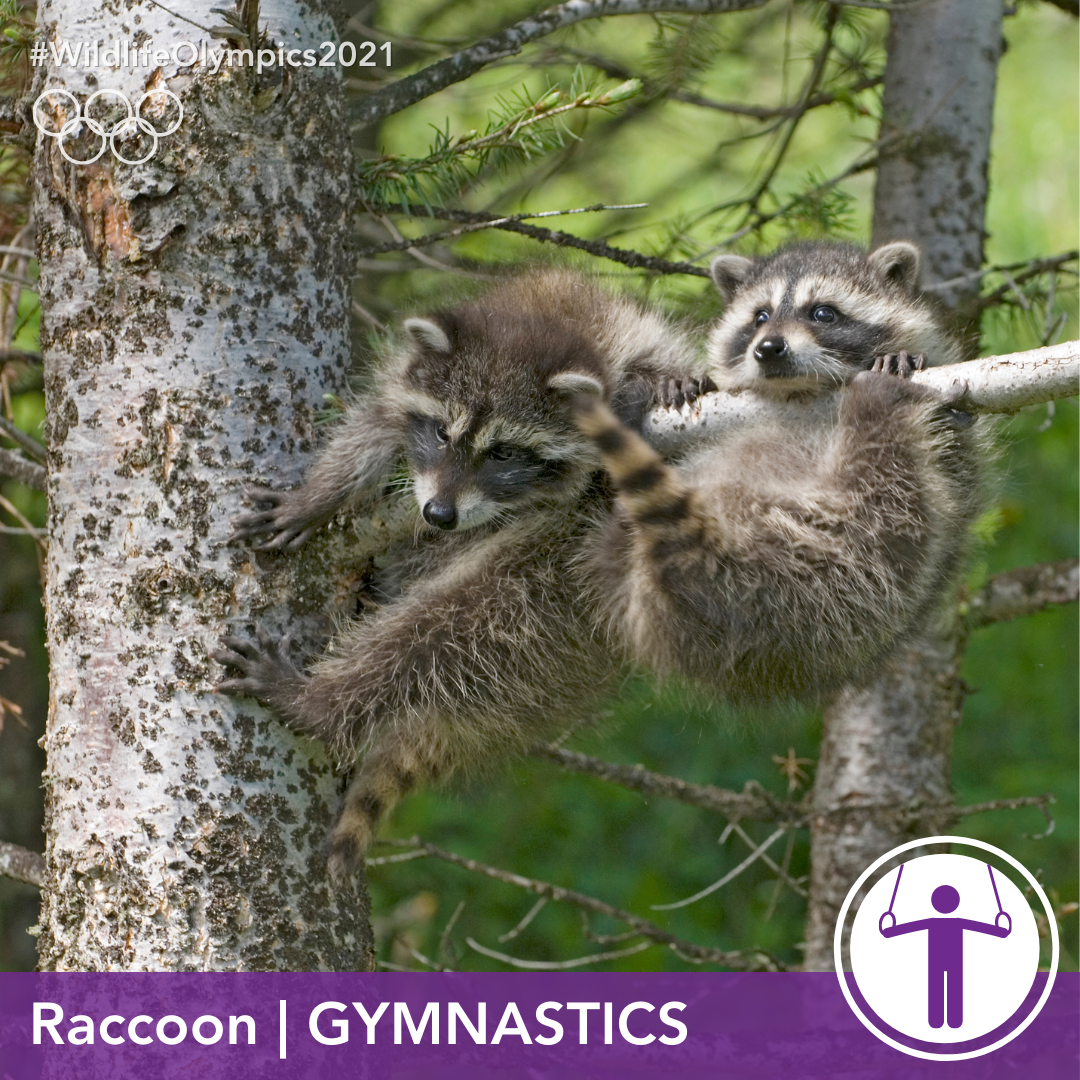 Our next animal Olympian is the RACCOON for gold medal in GYMNASTICS. These nocturnal mammals are surprisingly quick and agile acrobats. They are expert climbers and can withstand drops of 35 feet or more! While raccoons don’t technically have opposable thumbs, their five-fingered paws are more flexible and dexterous than most animals, which gives them the ability to grab, twist, and pull (look for raccoon paw prints that almost resemble a small human handprint). These semi-human paws allow them to hang from branches and rooftops, just like an Olympic gymnast swings from the rings or horizontal bar. Their characteristic hunched-over walk deceives a surprising sprint speed of 10-15 miles per hour – surely fast enough for a strong vault approach!

Check out this video from our friends at Peninsula Open Space Trust for a display of raccoon acrobatics! 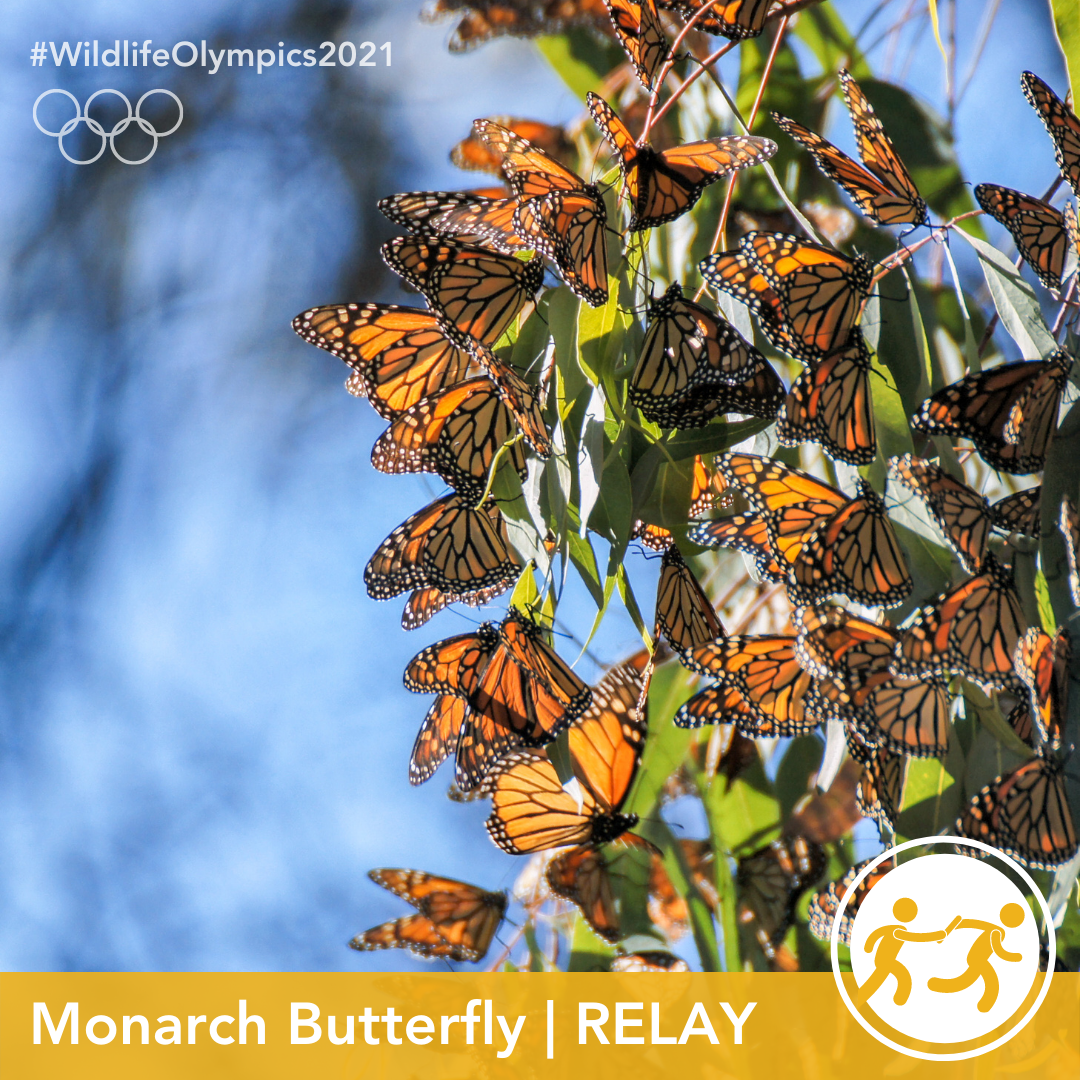 We’re closing out this summer’s games with the RELAY race gold medal going to the WESTERN MONARCH BUTTERFLY. These butterflies have one of the most impressive migrations in the animal kingdom. Monarchs east of the Rocky Mountains travel further distances to Mexico (up to 2,000 miles!), while our Western monarchs have a shorter migration to and from the California coast (700 miles). But an individual butterfly will never make this full migration...

One generation of monarchs starts on the coast, mates, lays eggs on milkweed plants, and dies. The next generation then begins the migration, moving generally east before they also mate, lay eggs, and die. Just like a relay race, each generation of monarchs picks up the migration to travel further across the landscape. After three or four generations, the last generation migrates all the way back to the overwintering grounds on the Pacific coast where their ancestors started. Unbelievably, these returning monarchs (sometimes called the “Super Generation”) fly back to the same groves of trees each year - even though they were born hundreds of miles away. Now THAT’S a gold medal relay team!

If you enjoy learning about native animals, register for our upcoming webinar, “A Bird’s Eye View of Coyote Valley” on September 16 to discover Coyote Valley and the wildlife who call this vibrant landscape home!