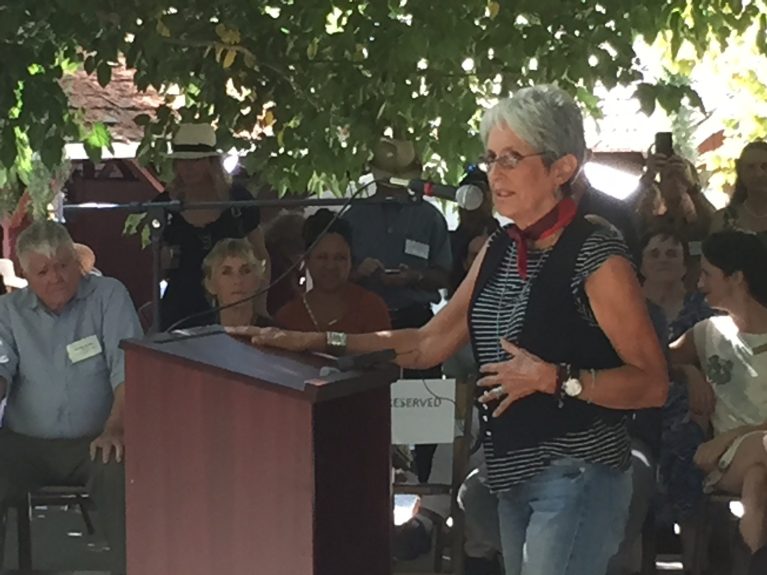 COYOTE — It wasn’t the most prominent award bestowed upon folk icon and social activist extraordinaire Joan Baez this year — she was inducted into the Rock and Roll Hall of Fame — but the Woodside resident was all smiles among fans at the Committee for Green Foothills fundraiser on Sunday.

Baez, a Woodside resident who is internationally known for her three-octave soprano range and diehard anti-war efforts, is also known on the local level for preservation work on the Peninsula, particularly those aimed at helping fauna friends.

“The gathering today was about people, old and young, who realize the value of the wilderness, the still running wild deer, bobcat, birds, and of course, the coyote,” she said after the event, which drew about 500 people. “There will always be the difficult challenges of slugging through the grab for land and power, general ignorance of our need to face up to global warming. But we can continue to show people that without nature we will soon barely exist.”

The committee, which is dedicated to preserving open space in Santa Clara and San Mateo counties, has been focused on the Coyote Valley south of San Jose on either side of Highway 101. It’s more than 7,000 acres of greenbelt that committee director Megan Medeiros said is one of the most threatened swaths of open space in the state.

“It’s the area where the Santa Cruz Mountains and the Diablo Range come so close together they almost kiss,” Medeiros said. “And it’s unique — it’s where bobcats and coyotes still thrive in Silicon Valley, keeping the ecosystem in balance. It benefits the entire Bay Area.”

The Committee for Green Foothills has been growing. They’ve seen member families grow from 550 in 2013 to about 1,000. And attendance at the fundraiser has increased from 200 in 2014 to this year’s 500. So while Baez, 76, is a big-name draw (she didn’t actually sing a song, but did do a coyote call impression that had the crowd tittering) she’s not the reason for the interest.

He said that while the city has a general plan that calls for projects that will create jobs, “we are increasingly recognizing that there are other opportunities for what can happen here in Coyote Valley.”

He brought up the importance of wildlife corridors, water retention, and flood control and recharging underground aquifers — all of which are eliminated when an area is paved over. A plan to build a huge warehousing operation in the valley was recently averted when the Peninsula Open Space Trust bought the 30 acres for $5.8 million.

“We have, I believe, some very enlightened landowners who are quite willing to engage with us,” Liccardo said, “to talk about how we can best preserve what is most precious.”

Baez said that despite her ’60s roots she’s often considered herself a cynic or a realist, not an idealist or an optimist. But especially on the local level, one can expect results from a push for preservation.

“These good things can happen if we work hard enough,” she said, leading into one of her own famous quotes. “I stand by that ‘action is the antidote to despair.’”