In 1868, famed naturalist John Muir visited the Santa Clara Valley on his way to Yosemite Valley, the place that would become his spiritual home and inspire a life-long devotion to protect America’s wildest places for the benefit of future generations.

We proceeded up the Santa Clara Valley to San Jose. It was the bloom-time of the year. The landscapes were fairly drenched with sunshine, all the air was quivering with the songs of the meadowlarks, and the hills so covered with flowers that they seemed to be painted. The valley of San Jose is one of the most fertile of the many small valleys of the coast ranges; its rich bottoms are filled with wheat fields and orchards and vineyards, and alfalfa meadows.

The last of the Coast Range foothills were in near view all the way to Gilroy; those of the Monte Diablo range on our left, those of the Santa Cruz on our right. They were smooth and flowing, and their union with the valley was by curves and courses of most surpassing beauty. They were robed with the greenest grass and richest light I ever beheld and were colored and shaded with myriads of flowers of every hue. 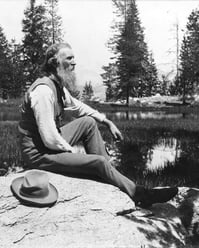 As the Open Space Authority celebrates its 25th Anniversary Year, we can’t help but reflect on Muir’s words and the truth they still hold today. As a unique public conservation agency formed to balance Santa Clara Valley’s growth and development with preservation of open space, stewardship of wildlife, water resources, and working lands, and providing exceptional recreational opportunities, the Authority’s work has never been so important or so resonant. From protecting and restoring natural areas, to maintaining existing open space preserves; from constructing new trails to increasing environmental education, the Authority is connecting communities to the land and building a stronger sense of place across the Santa Clara Valley for future generations, so they too can experience what John Muir so easily recognized as a special place.