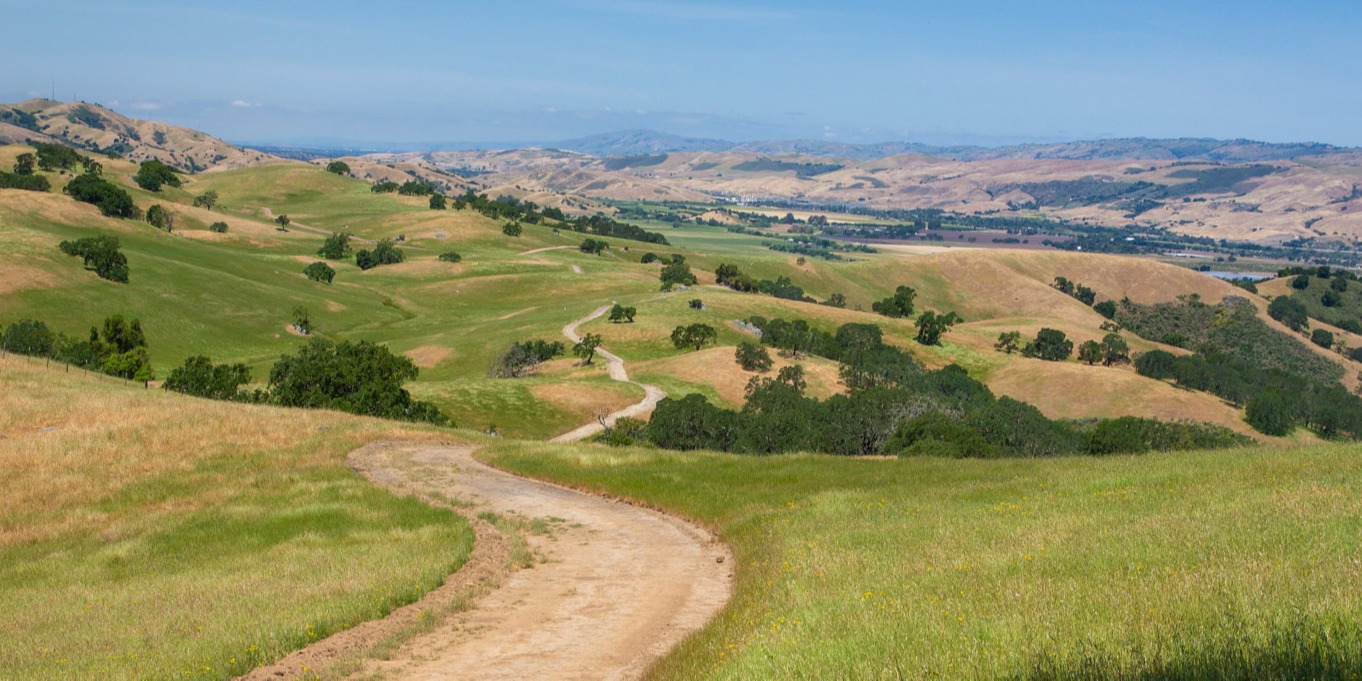 The Tilton Ranch acquisition comes on the heels of recent purchases of the neighboring 603-acre Baird and 93-acre Davidson ranches by the Habitat Agency, and the landmark November 2019 conservation deal by the Authority, POST, and the City of San Jose that protected close to 1,000 acres in what is now the North Coyote Valley Conservation Area. The Authority contributed $1.4M in Measure Q funds towards the acquisition.

This Tilton Complex of protected lands will expand the Authority’s adjoining 348-acre Coyote Valley Open Space Preserve, which was itself once part of Tilton Ranch, to nearly 3,000 acres, or 8 times its current size.

In the last decade, the Authority and its conservation partners have protected a horseshoe of over 12,000 acres in the greater Coyote Valley, a landscape that is one of the top ten conservation priorities listed in the Authority’s Santa Clara Valley Greenprint. This network of protected lands in the greater Coyote Valley now spans both sides of Hwy 101 from Coyote Ridge to the Santa Cruz Mountains, supporting critical wildlife movement, protecting water resources, and buffering urban areas from the effects of more frequent and intensive wildfires and floods.  Additionally, in 2019, Assembly Bill 948 authored by State Assemblymember Ash Kalra, who represents the 27th Assembly District that includes Coyote Valley, designated Coyote Valley as a landscape of statewide significance and created the 17,200-acre Coyote Valley Conservation Program (CVCP) Area. 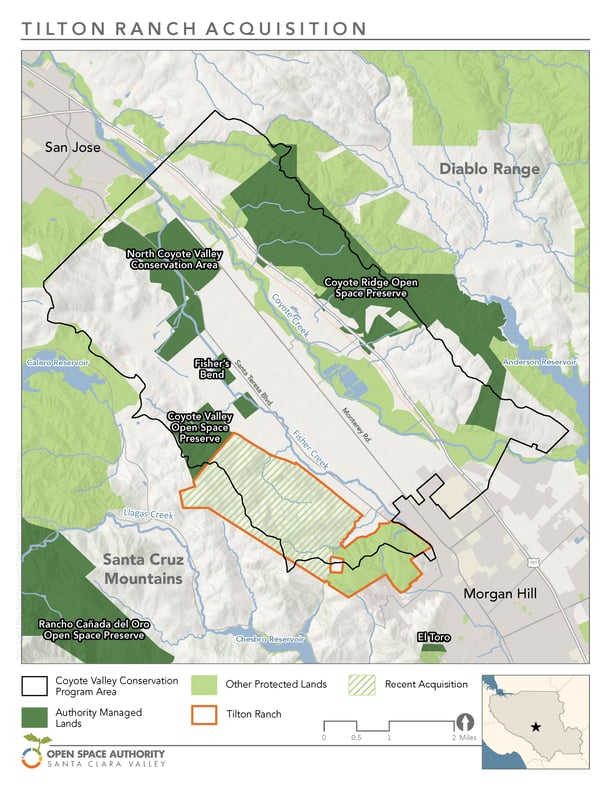 “The purchase of Tilton Ranch significantly expands the land protected within the Coyote Valley Conservation Program area,” said Assemblymember Ash Kalra. “This beautiful landscape will now be recognized and preserved for its historic agricultural significance and importance as a wildlife habitat.”

The Coyote Valley is incredibly important for wildlife conservation. As identified in the Authority’s Coyote Valley Landscape Linkage report, the valley floor is a linkage that allows animals to travel from the Santa Cruz Mountains in the west, to the Diablo Range in the east, and to the Gabilan Range to the south. Tilton Ranch is the headwaters of Fisher Creek which flows north to Laguna Seca and into the San Francisco Bay. Fisher Creek and its floodplain are used by wildlife for passage through the Coyote Valley and are the focus of the Landscape Linkage’s habitat, water quality protection and restoration efforts. 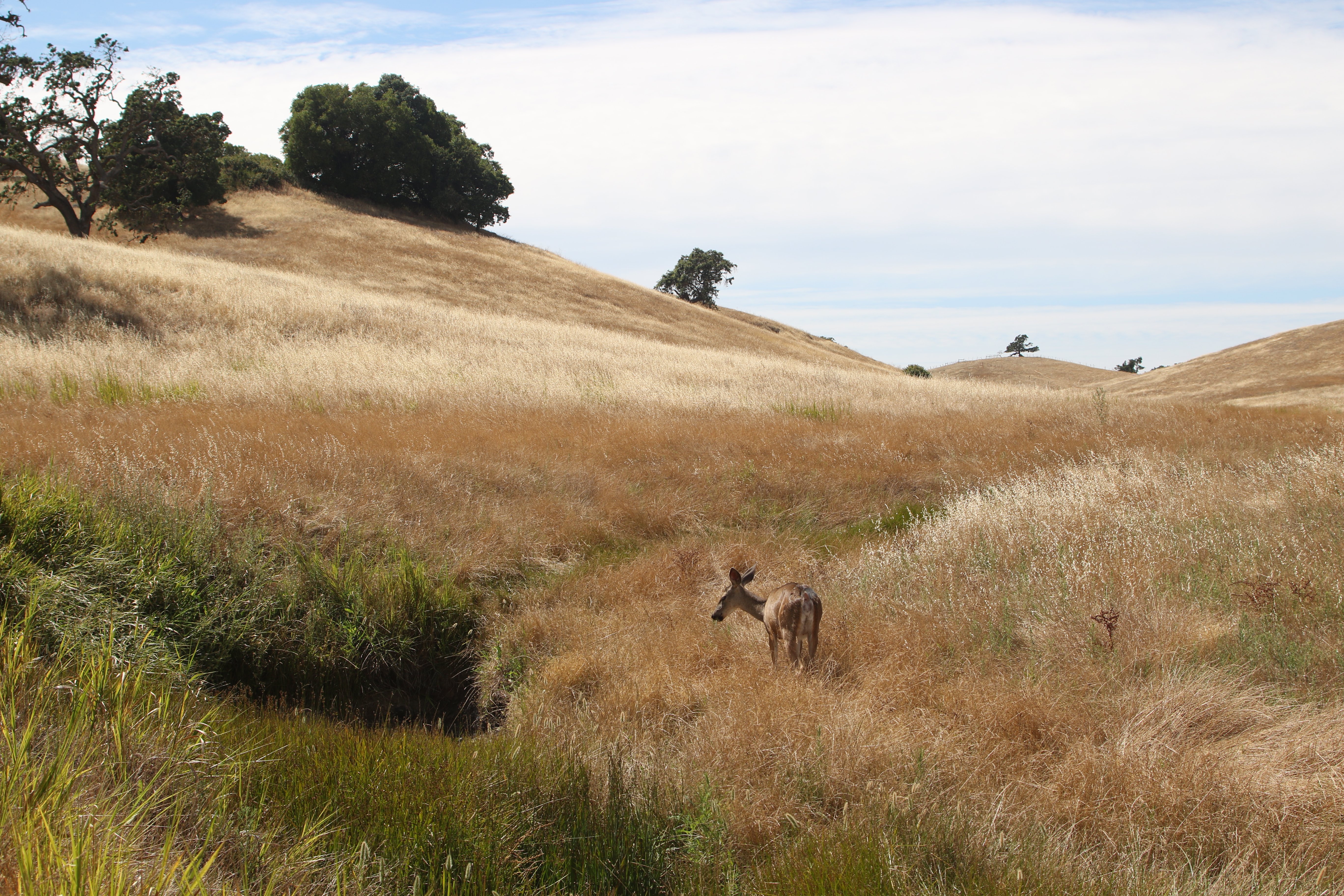 Additionally, the Baird portion of the Tilton Complex includes one of the last remaining undeveloped locations of serpentine soil that provides essential habitat for the endangered Bay checkerspot butterfly. 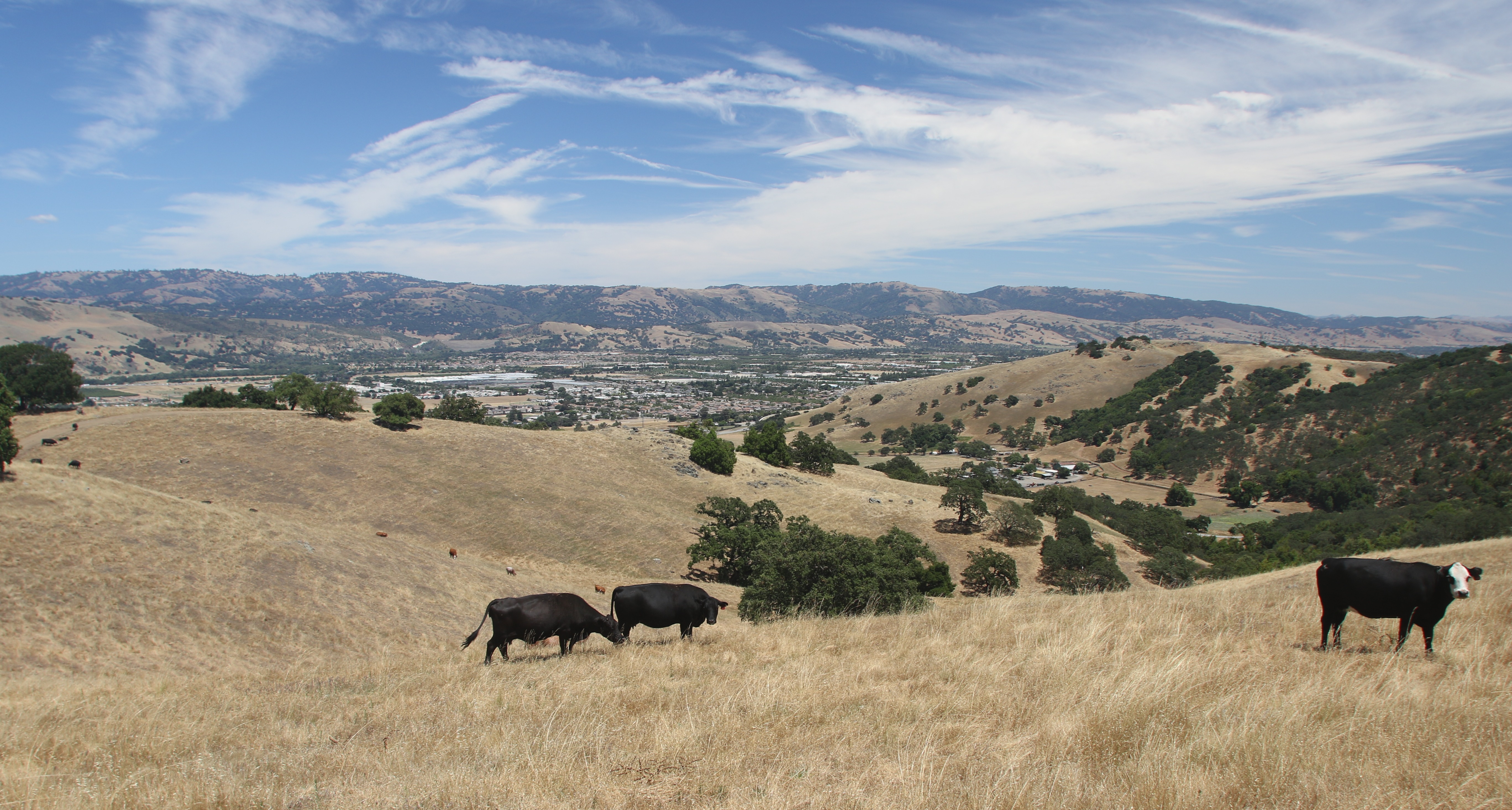 Tilton Ranch has played an important role in Santa Clara Valley’s agricultural heritage and local history. The ranch opened in 1917 and has operated continuously since then. For much of that time, the land has been grazed with cattle and dry-farmed for hay and grain. Mining for cinnabar also took place on part of the property early in the 20th century, through World War II. The ranch sits on ancestral lands of Indigenous peoples, who stewarded the land for millennia and whose descendants, members of the Muwekma Ohlone Tribe and the Amah Mutsun Tribal Band, still reside in the region.

Following the purchase of the property, the Valley Habitat Agency will work with state and federal wildlife agencies to create a reserve management plan, focused on the critical natural resources on the property. This plan will include continued conservation grazing as a land management practice. In late 2021, the Tilton property will transfer to the Open Space Authority who will coordinate with the Valley Habitat Agency and Santa Clara County Parks on a master planning process to define a long-term plan for the expanded Coyote Valley Open Space Preserve, including identifying public access opportunities compatible with the conserving the natural, agricultural and cultural values of the property. The Master Planning process is expected to take 3-5 years to complete. 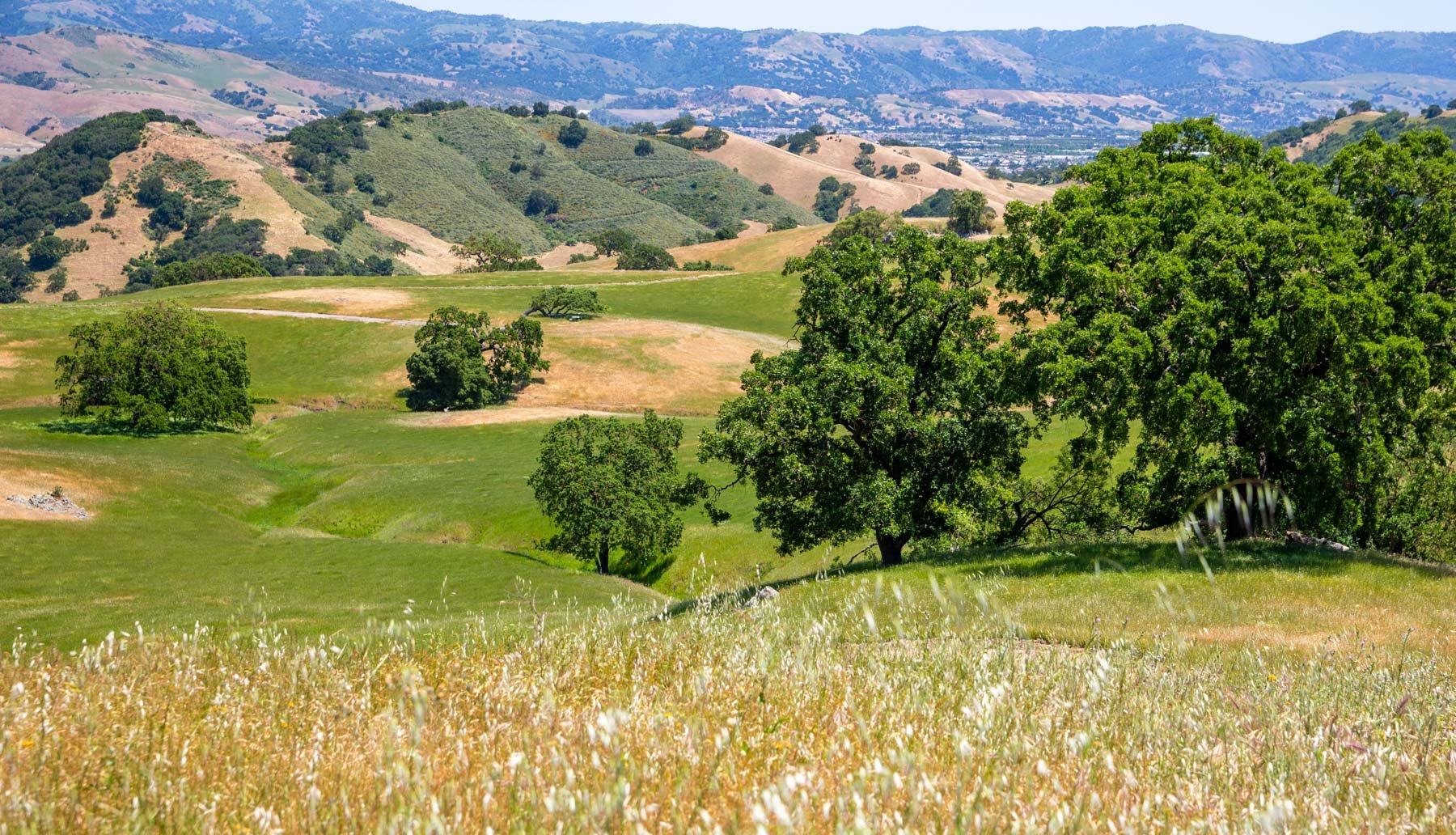 “The Valley Habitat Agency and the Open Space Authority have a strong long-standing relationship in furthering habitat protection in the Santa Clara Valley,” said Edmund Sullivan, Executive Officer of the Habitat Agency. “We look forward to working closely together with the Authority to manage this landscape for its multiple benefits - habitat protection, continued agricultural uses including conservation grazing, and opportunities for public access and recreation.”

Similar to current efforts in the North Coyote Valley, the Authority will begin connecting the public to the property as soon as possible to offer educational programming, volunteer opportunities, and docent-led access. 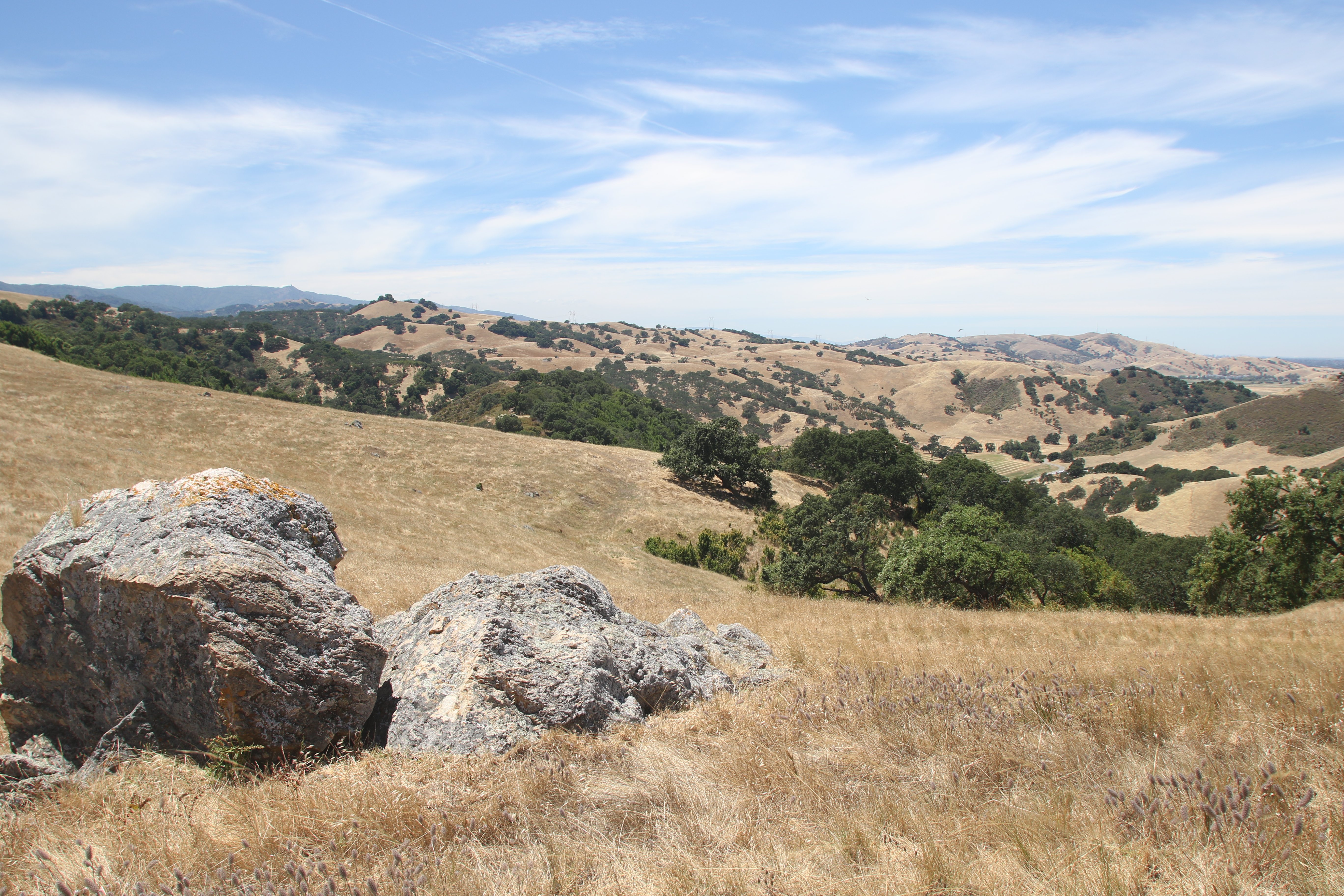 Photos courtesy of Hall and Hall and The Chickering Company