“Recent wildfires and flooding underscore the importance of defending our natural open space to keep our residents safe and honor the stewardship and advocacy of our environmental partners and indigenous community,” said San José Mayor Sam Liccardo. “By preserving Coyote Valley, San José remains committed to safeguarding our most precious resources for our children and future generations.”

“Today we again lift up this land and its future to say that we as a city move forward with the spirit of preservation for our collective future, for our wildlife, and for our environmental resilience," said Councilmember Sergio Jimenez, District 2.

In 2019, the City of San José, in partnership with the Peninsula Open Space Trust (POST) and the Santa Clara Valley Open Space Authority, protected 937 acres of habitats and floodplains in North Coyote Valley through a historic $96 million purchase and sale agreement and open space designation. The City, the Authority, and POST have further leveraged public and nonprofit investment by raising a total of $150 million from local, state, and federal sources for natural infrastructure protection.

"I felt pride in my heart when I heard the courageous vote by the City of San José Council to Protect Coyote Valley," said Charlene Nijmeh, Tribal Chairwoman of the Muwekma Ohlone Tribe of the San Francisco Bay Area. "The Muwekma Ohlone Tribe is proud to be in solidarity with the City of San José, Open Space Authority, POST, and Green Foothills in the protection of our remaining open spaces." 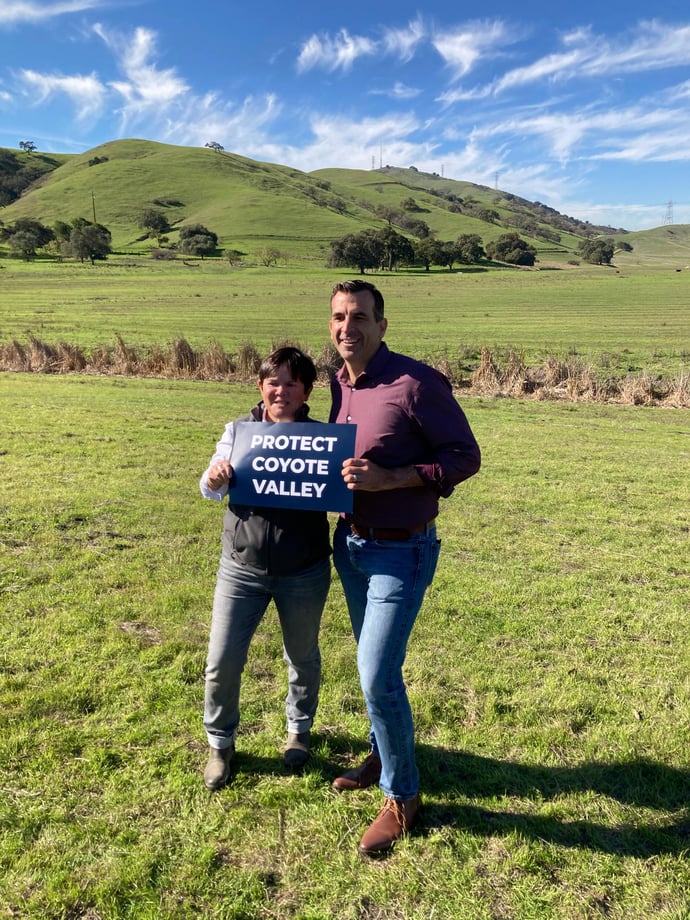 “Protecting and restoring Coyote Valley’s natural infrastructure is one of the smartest investments we can make to build climate resilience in the region and will help both nature and people adapt to climate change,” said Andrea Mackenzie, General Manager of the Santa Clara Valley Open Space Authority. "We are proud to partner with the City of San Jose to advance innovative nature-based solutions to the climate crisis right here in our own backyard.”

Staff recommendations include moving the urban development boundary north of Coyote Valley to preclude development of office buildings and industrial sites in the area, as well as modifying zoning for existing businesses to ensure that those already operating in the Valley can remain.

“Preserving our open spaces has many immediate and long-term benefits for our community and our environment," said Councilmember David Cohen, District 4. "Protecting Coyote Valley is a major step toward mitigating the effects of climate change and protecting our watershed. By paving over the area, we risk contamination and our ability to recharge our water supply. We, as a city, need to take strong action to protect our environment for future generations.”

According to technical analysis done for Climate Smart San José, the preservation of Coyote Valley would lead to a greenhouse gas (GHG) emissions benefit of an approximate equivalent to 94,000 metric tons carbon dioxide (MT CO2e) per year. This change alone represents two percent of the reductions needed to get from the City’s current GHG emissions levels to the 2040 Climate Smart San José plan goal.

“This is a historic milestone in the fight against climate change," says Megan Fluke, Executive Director of Green Foothills. "San José is on the path to be the most climate-resilient big city in the country by stopping sprawl, reducing flood risk, and preserving fertile farmland. Local wildlife have a better chance of survival now that we have protected a vital connection between the Santa Cruz Mountains and the Diablo Range. On behalf of the environmental community, I want to thank the Mayor and San José City Council for their leadership.” 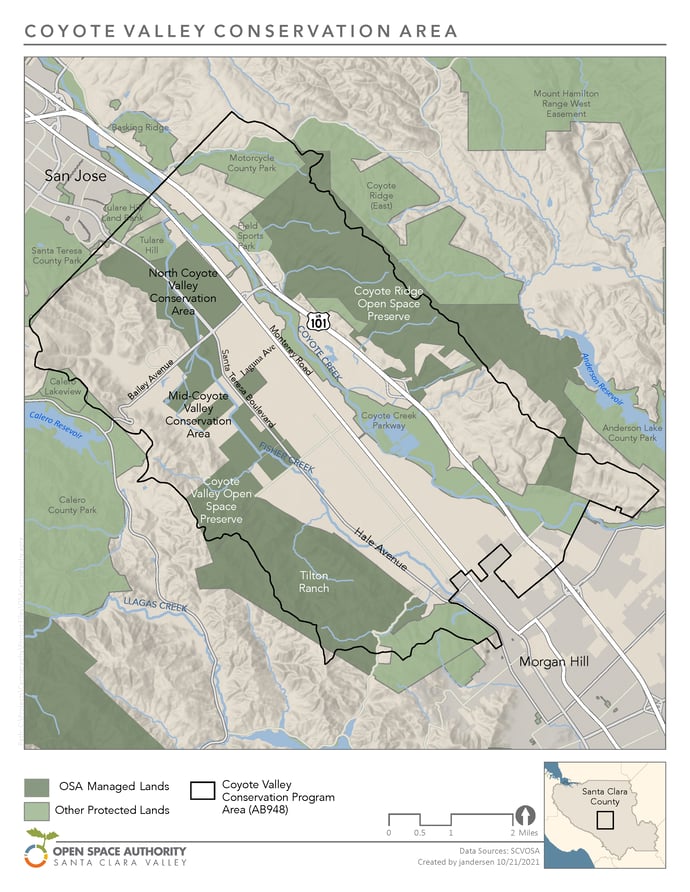 Coyote Valley represents 50% of Silicon Valley’s remaining undeveloped water recharge areas which are highly vulnerable to ground pollutant exposure from potential nearby industrial development. As a result of this Council action, the Coyote groundwater sub-basin remains protected from industrial contaminants.

“I’m proud that we here in San José have opted to preserve this vital resource against sprawl while continuing to consider viable and compatible uses that align with our long term vision for a sustainable future," said Councilmember Raul Peralez, District 3.

Underscoring Coyote Valley’s importance as one of the region’s most important forms of natural infrastructure, is Assembly Bill 948, proposed by Assemblymember Ash Kalra and signed into law in 2019. AB948 recognizes Coyote Valley as “a resource of statewide significance subject to intense development pressure and in need of restoration, conservation, and enhancement.”

“I am heartened that the City Council voted to preserve one of our few remaining open spaces in San Jose and the Bay Area," said Assemblymember Ash Kalra, District 27. "As we start to feel more of the effects of climate change, Coyote Valley will continue to provide important public safety and resilience benefits by recharging drinking water aquifers and absorbing and slowing floodwaters. For over 13 years I have worked to protect this important sanctuary in a sea of urban sprawl and will continue to do so for the benefit of future generations and innumerable plant and animal life.”

In a memorandum by Mayor Liccardo and Councilmembers Jimenez, Peralez, Cohen, and Foley adopted and passed unanimously by Council on Tuesday, the rezoning for agricultural and recreational uses includes direction to explore tourism options for businesses that are compatible with agriculture and wildlife connectivity like wineries and beer gardens, farmers markets and food stands, bed and breakfasts, educational exhibitions for community and Tribal partners, and outdoor special event areas.

The City will also explore the development of a carbon credits program that would be levied through future mitigation fees of development throughout the city to benefit public acquisition of land. This proposed program would directly benefit landowners in Coyote Valley and allow the City to grow the amount of protected open space available for residents and future generations to enjoy.

“Before our area was known for its silicon, it was known as the Valley of Heart’s Delight," said Councilmember Pam Foley, District 9. "Our open space and the inherent beauty that comes from our land was unmatched. Yesterday we took yet another step to further protect the natural beauty of our city ensuring the Coyote Valley will be preserved and protected for years to come. We did this to achieve our Carbon Neutral goals by 2030. We did this to protect this beautiful area for our birds and wildlife. We did this to protect the Coyote Valley so that it may be enjoyed by our children and their children, for many generations to come. We did this because it is unquestionably the right thing to do. We do not just talk about being good stewards of our open space, this act takes the step to show our commitment to being good stewards of our lands. The Coyote Valley is a hidden paradise. I was proud to be part of this effort to better preserve Coyote Valley’s open space because it brings me back to a time forgotten, when we truly were the Valley of Heart’s Delight.”