It all began when a French geographer discovered a parallel between the importance of preserving agricultural and natural lands on the Plateau de Saclay in France, and in Silicon Valley. Keep reading to learn more about this exciting information and idea exchange as the Open Space Authority continues working to address climate change using nature-based solutions to serve local communities in Santa Clara Valley.

The Plateau de Saclay, (adjacent to what is known as the European Silicon Valley) is a multi-benefit landscape just south of Paris, France, with many similarities to Coyote Valley, (one of the Open Space Authority's top conservation priorities) located at the southern urban edge of the City of San José, California.

Thus began the Open Space Authority's partnership with Terre et Cité, a non-profit organization created in 2001 by farmers on the Plateau de Saclay. In 2018, the Open Space Authority hosted Terre & Cité and others for a tour of Coyote Valley as part of a Global Climate Action Summit. This resulted in a very fruitful exchange of ideas about how to address climate change on peri-urban natural and working lands. After their visit, Terre & Cité was offered significant grant funding to support a tour for a California delegation to the Plateau de Saclay, and there was also great interest expressed by the State of California, U.C. Davis, U.C. Berkeley, and the City of San José in a reciprocal study tour.

Planning for the California delegation's conservation and climate exchange study tour in France began in 2019, right after the Open Space Authority hosted Terre & Cité and others in Coyote Valley. Due to the COVID-19 pandemic, the study tour was delayed for two years. During that time, the Open Space Authority continued to partner with Terre et Cité, the City of San José, the State of California, U.C. Davis, U.C. Berkeley, and a number of European agencies to facilitate a series of online international conferences and symposiums to discuss climate-related topics and nature-based solutions that pertain to preservation of agriculture and biodiversity in a peri-urban context.

Finally in July 2022, the California delegation headed to France to share ideas about ways to address climate change and serve local communities both in and around Coyote Valley and Plateau de Saclay. During the tour, the California delegation met with members of the European Commission, European Parliament, French National Senate, and prominent university researchers who are working on global climate change, biodiversity, and agriculture. Lots of ideas are being discussed regarding research partnerships, policy, regulation, and public education.

These findings will enhance the Open Space Authority's work moving forward as the agency addresses ways that nature-based solutions can be part of the climate solution for residents of the Santa Clara Valley. 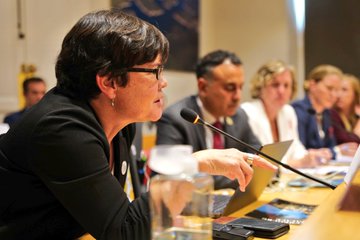 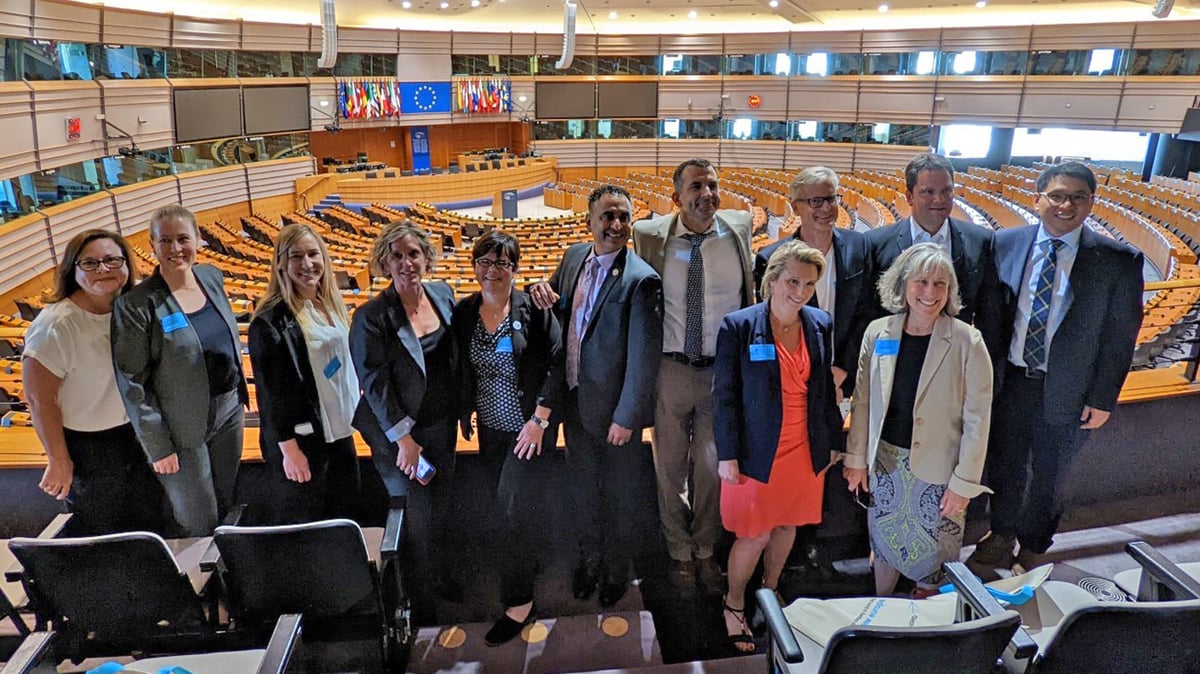 As the California Delegation met with European officials, researchers, and program strategists, it became clear that California and France are dealing with very similar climate issues in the peri-urban landscape.

In 2019, California State Assembly member Ash Kalra authored Assembly Bill 948 which designates Coyote Valley as a landscape of statewide significance in California. By highlighting the importance to all Californians of this 17,200 acre landscape, the Open Space Authority can better achieve restoration and conservation goals through greater access to public funds. Other regional initiatives have also been implemented here, such as the Santa Clara Valley Agricultural Plan, which outlines the preservation of agriculture from Coyote Valley to Gilroy, enacted by Santa Clara County in 2018. 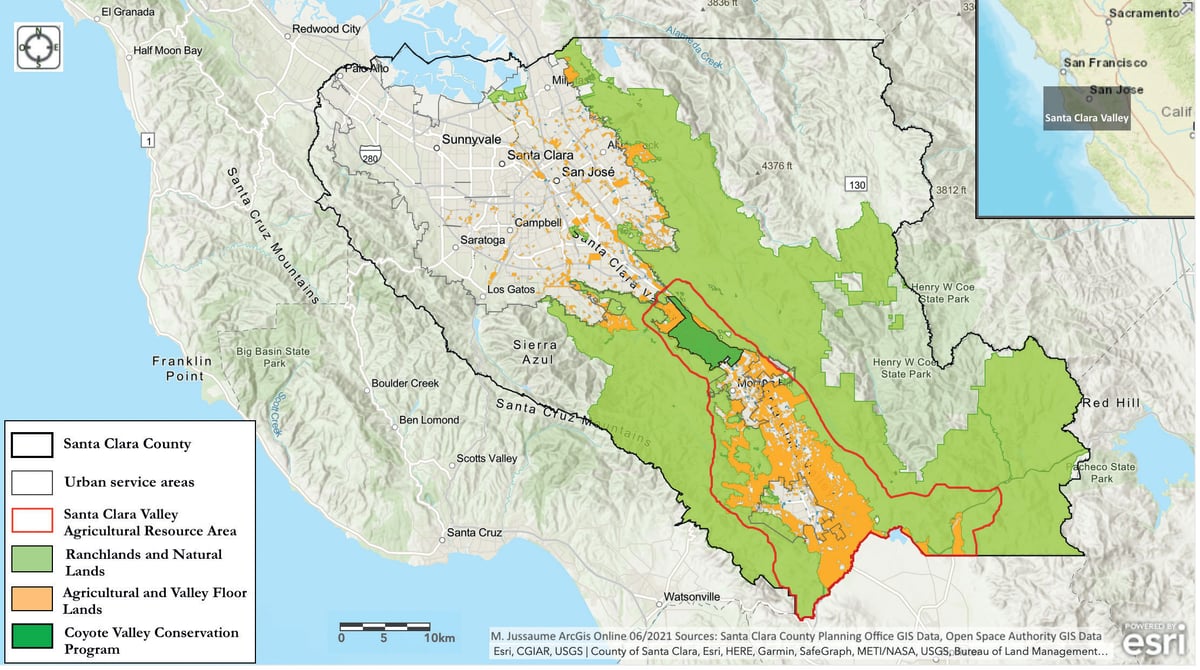 On the Plateau de Saclay, the “Zone de Protection Naturelle, Agricole et Forestière” is a public interest easement that sets out a regulatory perimeter of approximately 10,000 acres including 6,000 acres of agricultural land. Enacted in 2013, it protects the land from any form of development, in order to support the long-term agricultural viability of the region, and to enhance the biodiversity and aesthetic values of this peri-urban landscape.

In the Santa Clara Valley and on the Plateau de Saclay, urban sprawl threatens to compromise our precious open spaces, farms, and ecosystems that serve as natural infrastructure that help buffer nearby communities from climate change. Certainly, we all need places to live, work, and play in built environments. But we need to balance this “urbanization” with protection of our natural resources and agricultural activity – to reduce climate impacts, but also to maintain the rural identity of our surroundings that is so important to our quality of life.

With the preservation and enhancement of natural and working lands around communities, there is much greater potential for resilience in dealing with vulnerabilities to climate change (drought stress, risk of wildfires, floods, etc.). In Santa Clara County, more than 132,000 residents currently live in flood-prone areas (FloodSAFE California 2013) and by 2035, the demand for water is expected to exceed available resources (SPUR, 2013). Regarding wildlife, Santa Clara Valley is home to 18 endangered wildlife and plant species that are taken into consideration with protection and maintenance of habitat areas that are large enough to support sustainable populations.

As the delegation compared the two landscapes, valuable insights emerged regarding successful climate-smart land use, land use, conservation, and agricultural practices, policies, and initiatives. This offered invaluable perspective into lessons learned, and where gaps remain, and how we can accelerate our climate actions globally by working more closely together. 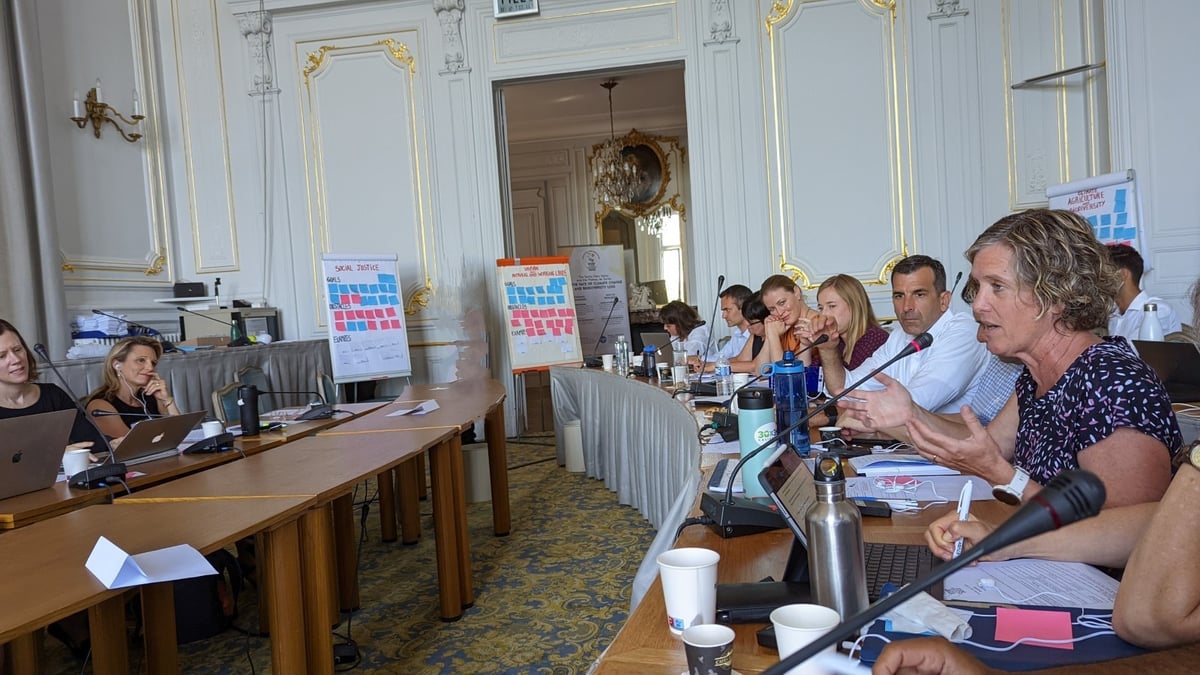 Photo Caption: Jennifer Norris, Deputy Secretary for Biodiversity and Habitat at the California Natural Resources Agency, explains the progress and remaining challenges of implementing the State's 30x30 initiative (to protect 30% of the State's land and waters by 2030). 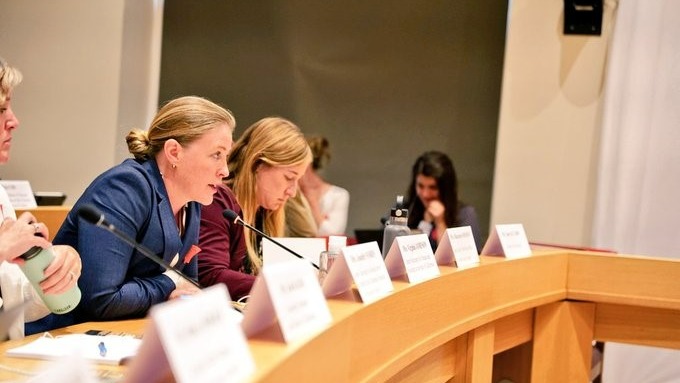 Photo Caption: Virginia Jameson, Deputy Secretary for Climate and Agriculture at the California Department of Food and Agriculture, describes polices and programs that support working lands. 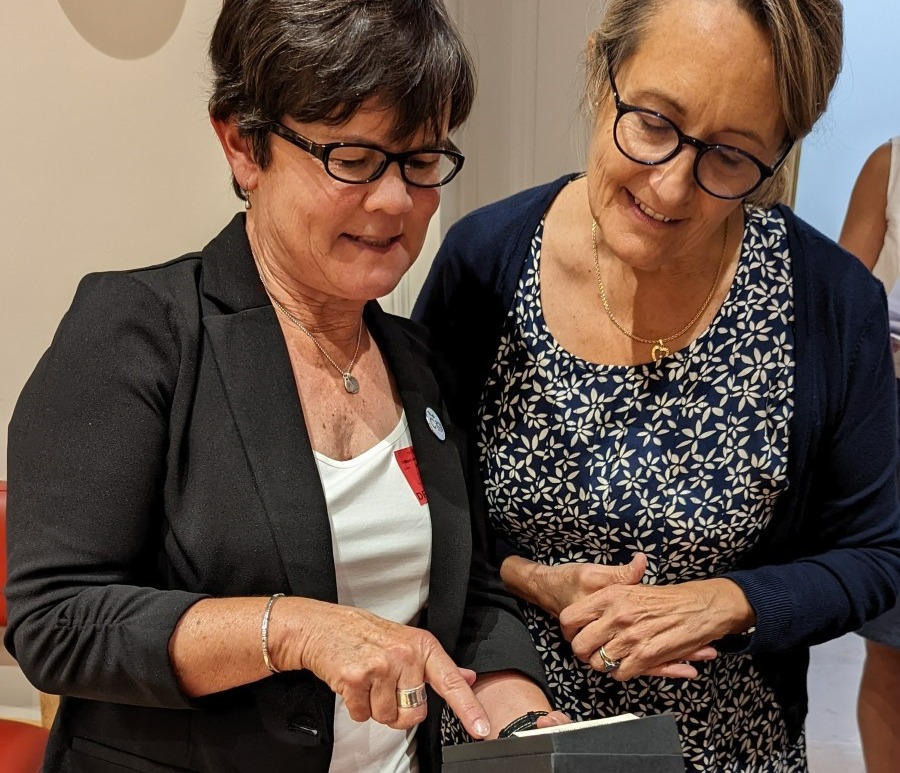 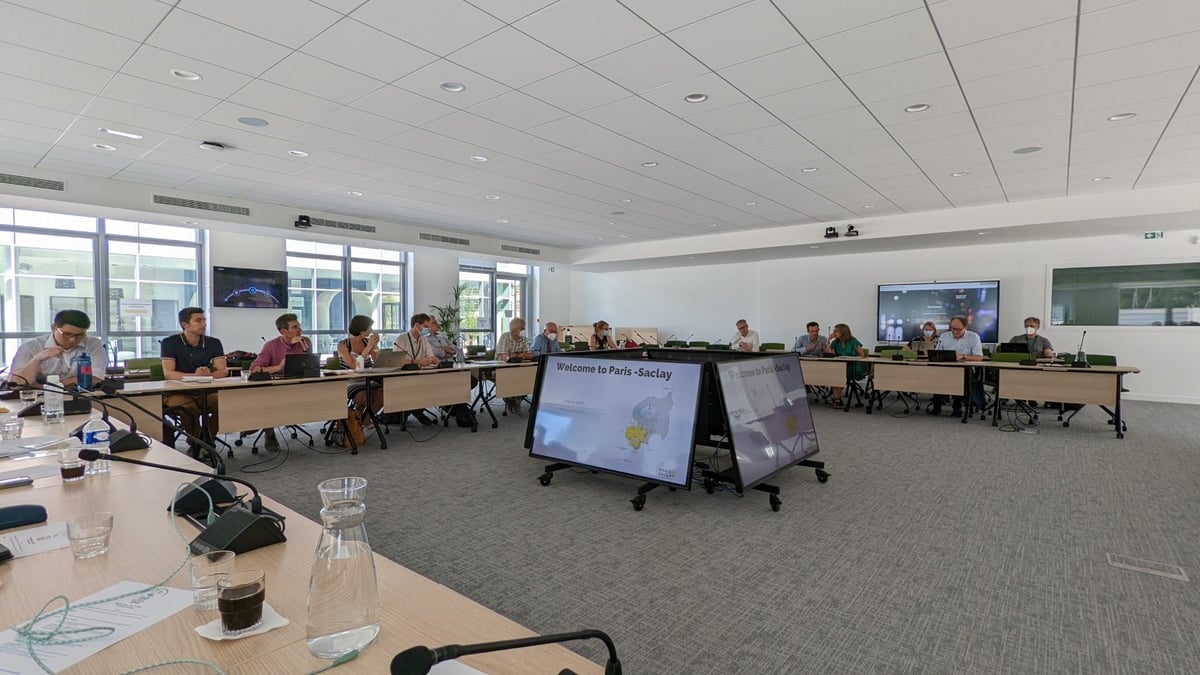 Photo Caption: Discussions with local and international climate researchers resulted in some important takeaways and commitments for further collaboration. Per climate expert and IPBES lead author Paul Leadley: "It is only by comparing the ways we approach protection on two landscapes and understanding the challenges in such different areas, can we hope to scale our solutions." 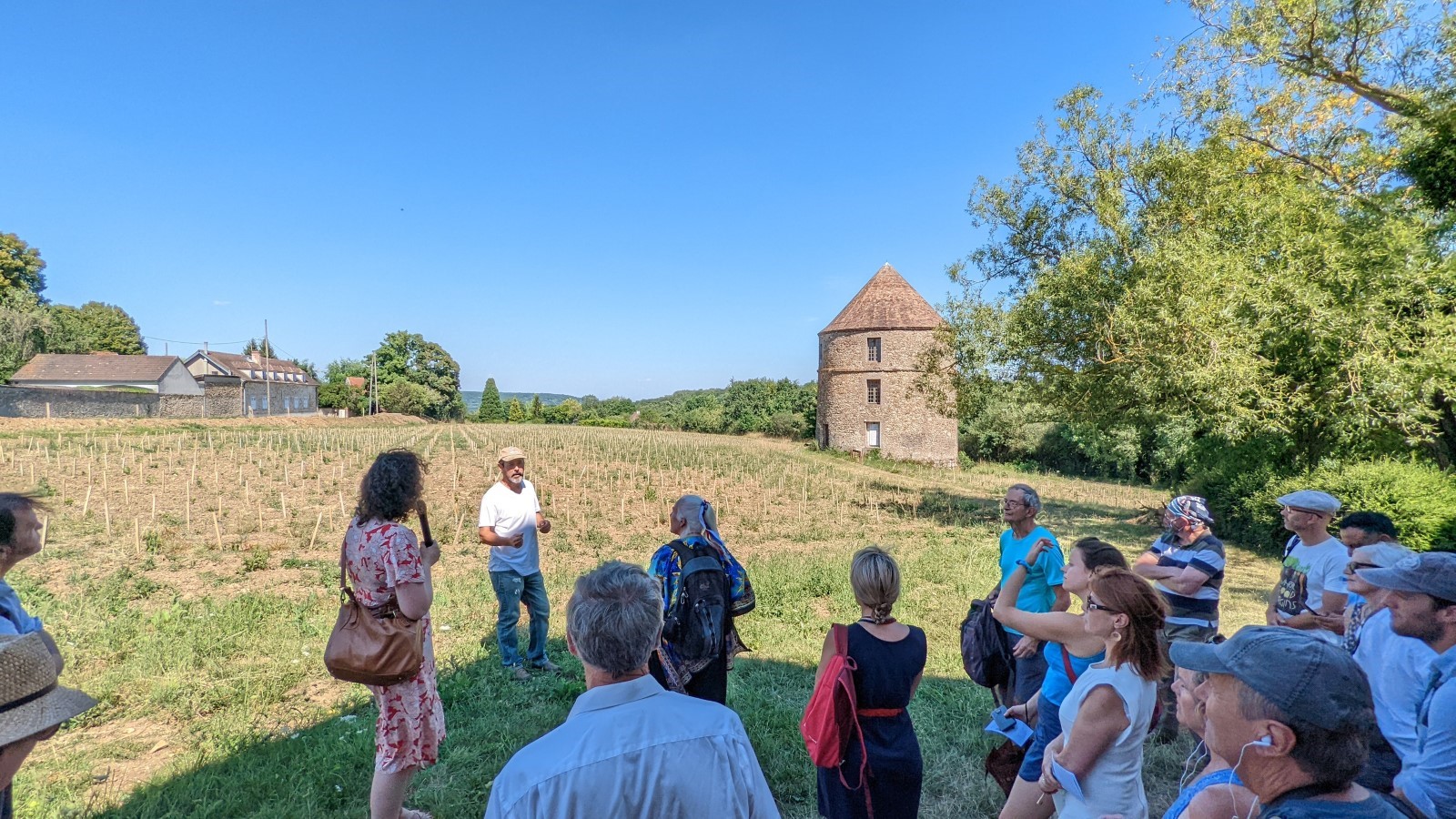 Photo Caption: The CA delegation was taken on a tour of several farms on the Plateau de Saclay. The delegation learned about climate-smart farm practices, methods to engage urban residents from Paris in u-pick and other programs, and to better understand how local farmers work collaboratively with each other to create a regionally-resilient urban-edge farming system that also has a strong voice in regional and national government.

Want to learn more about European initiatives discussed during the France-California Conservation and Climate Exchange? Keep reading to learn about just some of the cutting-edge ways Europe is addressing climate change using local, nature-based climate solutions.

Did you know? The European Green Deal has a goal of European Climate Neutrality by 2050 with a strong focus on equity.

Through coordination and funding, 150 regions across the European Union (EU) are developing transformative and integrated local climate solutions, many of which they hope to scale across the continent. These include:

Did you know? The European Union has a Common Agricultural Policy that is the same for all EU countries and that funding comes from 1% of GDP from each EU member country.

This program focuses on funding programs for:

Did you know? The European Union has a “Net Zero Cities Program” where 100 cities have pledged to be net zero by 2030

This is happening in a variety of ways, including the following examples: